The amends come after the Morant family was subjected to racist and explicit language by Jazz fans last week.

Three fans were ejected from Game 2 and later banned from Vivint Arena for separate incidents of harassment, which included one fan cursing out Morant’s mother and another who made a sexually explicit remark toward her.

“It was a nice gesture from the Jazz,” Ja Morant’s father, Tee Morant, told ESPN. “It was unfortunate. It was just a few fans — most of them were great and cheering right alongside with us.” 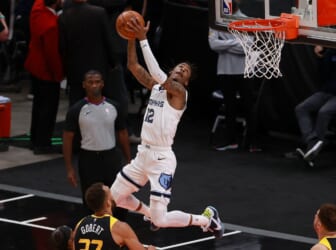 The incident was among the first in a string of high-profile altercations and instances of fans harassing NBA players this postseason. A New York Knicks fan was banned from Madison Square Garden for spitting on Atlanta Hawks guard Trae Young. A Philadelphia 76ers fan was banned from Wells Fargo Center for dumping popcorn on Washington Wizards star Russell Westbrook.

Then, this week, a Boston Celtics fan was banned from TD Garden and charged with assault for throwing a water bottle toward Brooklyn Nets star Kyrie Irving’s head, and a Wizards fan could face charges along with an arena ban for running onto the court during the Washington’s home game against the 76ers in Game 4 Monday.

It also wasn’t the first time Jazz fans were in the center of controversy. A Utah fan received a lifetime ban from the arena in 2019 for allegedly shouting racist verbal abuse at Westbrook.