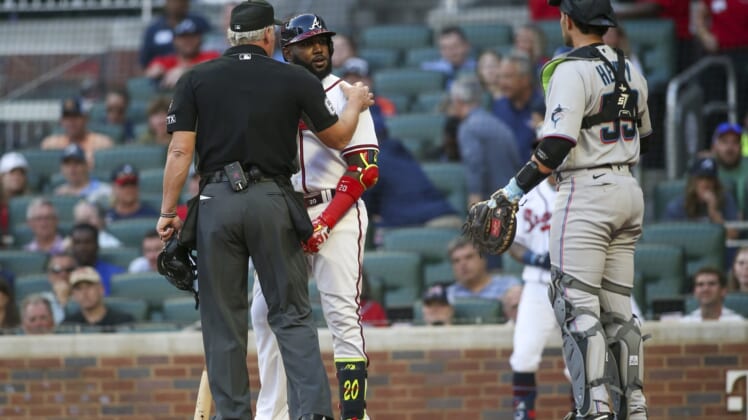 Jazz Chisholm Jr. homered and drove in three runs and the visiting Miami Marlins broke out of their offensive slump to beat the Atlanta Braves 9-7 on Saturday.

Chisholm was 4-for-6 with three runs scored and two stolen bases, and he hit the game’s first pitch for a home run. It was his sixth multiple-RBI game of the season.

Chisholm sparked a 14-hit attack that included two hits each from Jesus Aguilar, Jesus Sanchez, Avisail Garcia and Joey Wendle. It was the second-highest run total the Marlins have produced this season.

Miami trailed 5-3 entering the sixth. It tied the game when Chisholm hit a two-run single, and took the lead on Jorge Soler’s RBI single.

Atlanta regained the lead by scoring two times in the bottom of the inning, only to have Miami rally for three more in the seventh on pinch-hitter Garrett Cooper’s two-run single and Aguilar’s sacrifice fly.

Steven Okert (2-0) picked up the win in relief, getting two outs to finish the bottom of the sixth.

pitched two-thirds of an inning. Anthony Bass, Cole Sulser and Tanner Scott (first save) each followed with a scoreless inning pitched. The Miami bullpen retired the final 11 batters.

Atlanta reliever Spencer Strider (0-1) took the loss. He did not retire a batter in the seventh inning and allowed three runs on two hits and two walks.

It was just the second time that both team’s leadoff hitters hit a first-pitch leadoff home run in the same game since pitch counts have been tracked in 1988, according to mlb.com.