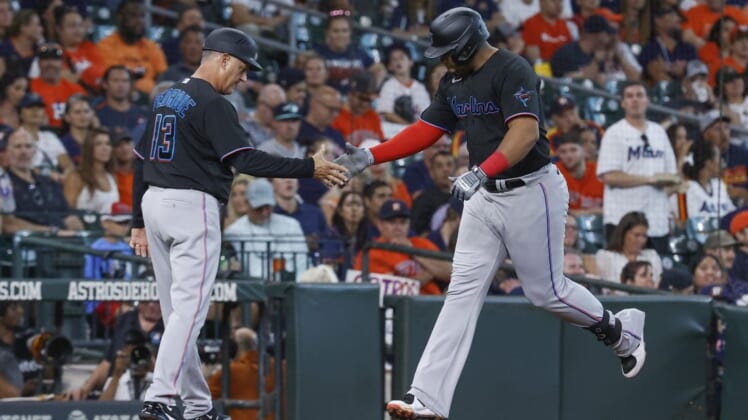 Jazz Chisholm Jr. and Jesus Aguilar recorded multi-homer games and five relievers filled a void after starter Pablo Lopez was lost to injury as the visiting Miami Marlins opened a three-game interleague series by beating the Houston Astros 7-4 on Friday.

Chisholm homered twice off Astros right-hander Luis Garcia (3-5), while Aguilar hit a solo homer off Garcia in the first inning and a two-run shot off Astros reliever Phil Maton in the fifth.

Chisholm’s blasts matched Aguilar’s pattern: a solo shot in the first and a two-run shot in the fifth. Chisholm deposited both of his homers into the Astros bullpen in right-center field, with his second of the game and 12th of the season extending Miami’s lead to 4-1.

Two batters after Chisholm’s leadoff homer in the first, Aguilar slugged a 394-foot shot to left-center for a 2-0 lead. His blast to left-center off Maton was even more prodigious: a 432-foot blast with an exit velocity of 105.7 miles per hour that built the Marlins’ advantage to 6-1. The Chisholm homers covered 407 and 399 feet, respectively.

The offense gave the relief corps enough of a cushion to thrive when Lopez departed in the fifth.

Lopez surrendered a solo home run to Michael Brantley in the first inning that cut Miami’s lead to 2-1. Lopez worked around a pair of baserunners in both the second and third innings and a leadoff double from Yuli Gurriel in the fourth.

Lopez struck out Jose Altuve to open the fifth before Brantley smoked a line drive up the middle that struck Lopez on the right (throwing) wrist.

Lopez, who entered his 12th start third in the National League with a 2.18 ERA, allowed two runs on six hits and two walks with five strikeouts over 4 1/3 innings.

The Marlins piecemealed their way after that, with Richard Bleier, Dylan Floro, Steven Okert, Cole Sulser (1-3) and Tanner Scott combining to allow two runs on five hits and three walks. They struck out five. Scott recorded his fourth save with a perfect ninth.

The Astros greased the skids to their own demise by stranding 11 baserunners and finishing 2-for-16 with runners in scoring position.