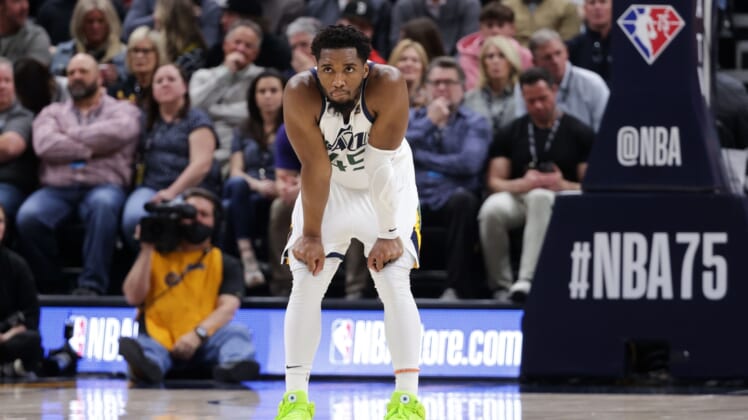 Two teams trying to hang on to the No. 4 seeds in their respective conferences will square off in Salt Lake City on Wednesday night when the Utah Jazz host the Chicago Bulls.

Neither squad has played to its potential in recent games — each lost Monday night — and neither wants to slip out of a top-four spot as the playoffs approach in less than a month.

The Dallas Mavericks have caught up with the Jazz at 42-26, with Utah having lost four of seven, including a gut-wrenching 117-111 home loss to Milwaukee on Monday night. The Jazz currently hold the head-to-head tiebreaker (2-1), but the teams play again in Dallas later this month.

The Bulls, at 41-27, hold a tenuous half-game lead over No. 5 Boston (41-28) for home-court advantage in the first round of the Eastern Conference playoffs. Chicago has dropped six of eight, including a 112-103 setback in Sacramento on Monday.

Chicago made things interesting against the Kings after falling behind by 20 and then pulling within one early in the fourth quarter, but Sacramento fended off the visitors’ comeback efforts after that despite solid nights from Zach LaVine (27), Nikola Vucevic (23 points, 10 rebounds) and DeMar DeRozan (21).

Realistically, the Bulls could still end up anywhere from the first seed to No. 7 as they trail first-place Miami by 3 1/2 games and only have a three-game edge over seventh-place Toronto with 14 games left.

“We need to have those conversations and get on point going into this last stretch because it’s not going to get any easier,” LaVine said after losing to Sacramento. “We have to play the right way and have a certain identity. Obviously we didn’t do that tonight. We have to learn from this. If not, then that’s on us.”

The Bulls have lost their past three games in Utah, but did beat the Jazz at home in October. DeRozan scored 32 in that early season win.

Utah held double-digit leads against Milwaukee in the first and third quarters, but Giannis Antetokounmpo sparked a fourth-quarter rally by the Bucks and ended up with 30 points and 15 rebounds.

Donovan Mitchell led the Jazz with 29 points and eight assists, but he made a couple of critical mistakes in the final minutes — and the Jazz, who only trailed by a bucket with 22 seconds left, missed six of their final seven shots.

“We made mistakes, had missed shots and turnovers,” Mitchell said. “They are champs for a reason.”

On the bright side for the Jazz, Mike Conley broke out of a slump for his best game in a while. He also scored 29 on 10-of-13 shooting with seven assists. He’d only scored 18 points on 5-of-34 shooting in his previous four outings.

“The biggest thing that he and I’ve talked about is just continuing to be aggressive. That’s what it was tonight,” Jazz coach Quin Snyder said. “You know, whether the ball’s going or not. We need that from him. And he gave it to us.”

Both teams are playing through a tough stretch. The Jazz host the Clippers on Friday and then embark on a six-game coast-to-coast trip, beginning in New York and ending in Los Angeles. The Bulls head to Phoenix on Friday, play Toronto in Chicago on Monday and then head on the road for five consecutive contests, beginning Tuesday in Milwaukee.