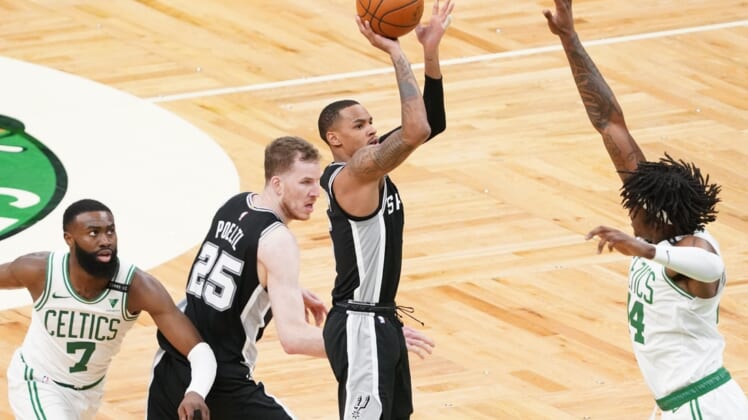 Jayson Tatum scored a career-high 60 points, including four free throws in the final 12 seconds of overtime, as the Boston Celtics came back from a 32-point, second-quarter deficit to beat the visiting San Antonio Spurs 143-140 on Friday in a wild game.

The Celtics’ worst deficit came 18 minutes into the game, but they roared back to tie the contest midway through the fourth period. Boston took its first lead since the game’s opening minutes, at 127-126, on Tatum’s 3-pointer with 38 seconds remaining. Tatum then hit a free throw with 18.8 to play to push the Celtics’ lead to two points.

The Spurs’ DeMar DeRozan retied the game with a pair of free throws with 10.8 left, giving Boston a final shot for a win in regulation, but Tatum missed a jumper at the buzzer.

The extra period went back and forth, with the Spurs taking the lead at 137-136 on a jumper by Lonnie Walker IV with 31.7 seconds left. Jaylen Brown canned a 3-pointer to put Boston on top with 16.7 seconds to play, and Marcus Smart stole San Antonio’s ensuing inbounds pass, setting the stage for Tatum’s free throws that capped the comeback win for the Celtics.

Brown added 17 points for the Celtics (34-30), hitting just 5 of his 24 shots from the floor. Aaron Nesmith had 16 points, and Smart and Robert Williams III scored 10 for Boston. Tristan Thompson took 15 rebounds and Smart had 12 assists.

DeMar DeRozan scored 30 points and distributed 14 assists, tied for his career high, for the Spurs (31-31) in the loss. Dejounte Murray and Walker added 24 points, Rudy Gay had 16, and Jakob Poeltl racked up 15 points and 10 rebounds.

The Spurs were up by as many as 25 points on the way to a 39-16 lead after 12 minutes of play. The Celtics’ first 12 points in the period were scored by Tatum, who finished with 14 in the first quarter.

San Antonio pushed its advantage to as many as 32 points before settling for a 77-48 lead at halftime. The Spurs made 71.4 percent of their shots from the floor.