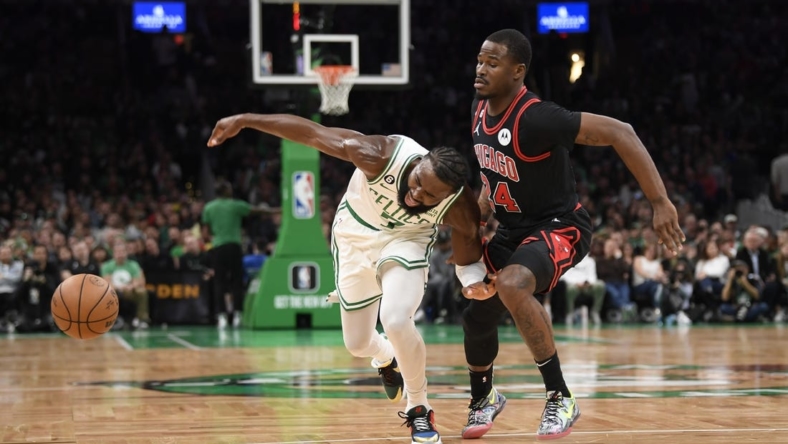 Jayson Tatum ran up a team-high 36 points, Sam Hauser and Derrick White buried key fourth-quarter 3-pointers and the Boston Celtics avenged a recent loss to the Chicago Bulls with a 123-119 home-court win on Friday.

Malcolm Brogdon chipped in with 25 points and Jaylen Brown added 16 for the Celtics, who had lost three of their previous four, including a 120-102 setback at Chicago on Oct. 24.

DeMar DeRozan had a season-best 46 points in defeat for the Bulls, who led by as many as eight late in the first quarter before gradually watching their two-game winning streak end.

The visitors were within 93-87 entering the final period before they went more than four minutes without a point.

Meanwhile, Hauser buried his 3-pointer, sandwiched by hoops from Tatum and Grant Williams, as the Celtics used a 7-0 run to go up 100-87.

The Bulls never caught up, but a 3-pointer by Nikola Vucevic got them as close as 109-103 with 4:10 to play. When Vucevic sank another trey a little more than two minutes later, suddenly it was just a four-point game with 1:55 to go.

DeRozan continued a busy night at the free-throw line by making a pair to close the gap to 114-112 with 1:24 remaining, but White nailed his back-breaking 3-pointer on Boston’s next possession to give the Celtics a late cushion.

Both Tatum and DeRozan padded their point totals with big games at the free-throw line, Tatum going 17-for-20 and DeRozan 20-for-22.

The difference was that the Celtics were awarded 19 other foul shots, making 15, while the Bulls got to the line just three more times, hitting two.

Tatum also found time for team-high totals in rebounds (12) and assists (six). The double-double was his second in a row and third of the season.

Marcus Smart added 12 points and Al Horford 11 for the Celtics, who took advantage of 17 Chicago turnovers to accumulate 21 of their points.

DeRozan shot 13-for-23 for the Bulls, who lost despite hitting at a 51.8 percent clip. The Celtics weren’t far behind at 49.4 percent.

Vucevic finished with 24 points and 12 rebounds for Chicago, while Zach LaVine chipped in with 16 points and Ayo Dosunmu had 11.