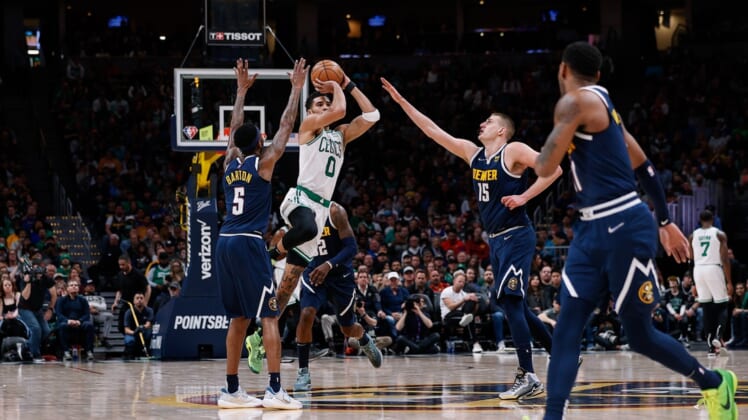 Jayson Tatum and Jalen Brown scored 30 points each and the visiting Boston Celtics used a big second quarter to beat the Denver Nuggets 124-104 on Sunday night.

Payton Pritchard scored 17 and Grant Williams had 13 points for Boston, which has won the first three games of its four-game road trip.

Nikola Jokic had 23 points on 8-for-23 shooting, Aaron Gordon scored 13, DeMarcus Cousins had 12 and Bones Hyland 11 for Denver, which has lost two straight and three in a row at home.

The Celtics led 33-27 after the first quarter and then took control with in the second quarter.

It was 44-36 after Brown’s jumper, but Barton hit a 3-pointer to cut it to seven. That was the last thing that went right for the Nuggets in the first half.

Grant Williams made a turnaround jumper, Robert Williams dunked and Pritchard hit a corner 3-pointer to put the Celtics ahead 51-39 and force a Denver timeout.

Jokic missed a 13-footer out of the break, Brown made a finger roll and the Nuggets missed three shots on their next possession. Boston then hit a barrage of 3-pointers, three of them by Tatum and a pair from Pritchard to cap a 22-2 run and lead 68-41.

Jokic’s putback was one of two baskets Denver made in the final 6:08 of the half, and Tatum nearly trumped it but his halfcourt shot at the buzzer rimmed out.

Brown hit a jumper to start the third quarter and the Nuggets, who began the second half by playing the bench, responded with seven straight points to get within 20. Rivers hit a 3-pointer that made it 74-55 with 9:13 left in the third.

The Celtics answered and scored seven straight points to make it 90-62 and led 98-75 heading into the fourth.

Denver surged to start the fourth, cutting the deficit to 102-86 on a dunk by Gordon. The Nuggets had an opportunity to get closer but Gordon was called for an offensive foul and Tatum hit a 3-pointer and a dunk to make it 109-88.