Jays turn to Alek Manoah in bid for sweep of Yankees 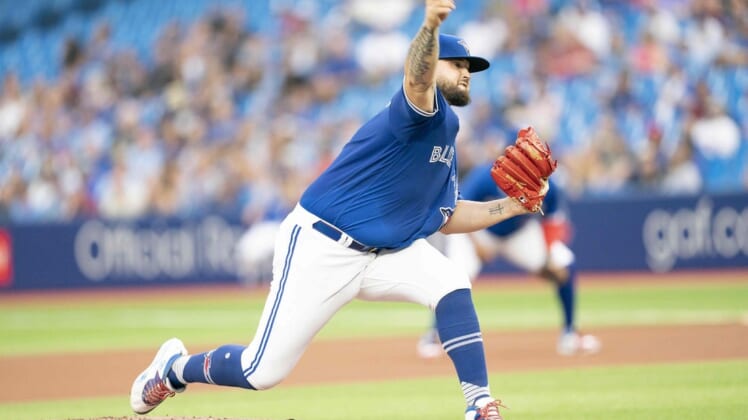 New York Yankees right-hander Gerrit Cole lamented slightly slipping off the mound and not being able to get Toronto’s Vladimir Guerrero Jr. at first base during the Blue Jays’ four-run fifth inning Saturday.

Shortly before Cole expressed his disappointment at the pivotal play, manager Aaron Boone expressed his anger by pounding his right hand on the podium in the Yankee Stadium interview room.

These are frustrating times for the Yankees, and the Blue Jays will relish another opportunity Sunday at extending the misery and improving their position in the tightening American League East race.

Toronto will go for its second four-game sweep in New York in nearly a year.

In Saturday’s 5-2 win, Alejandro Kirk and Jackie Bradley Jr. hit two-run doubles off Cole — who was picked up by television cameras punching the roof of the dugout with both hands twice — and Matt Chapman added a homer.

“They know they’re really good,” Toronto interim manager John Schneider said of his team. “The Chappy homer was awesome in the ninth inning to kind of just say, ‘OK, yeah, we’re here.’ So they’re not going to back down from anybody.”

The Blue Jays outscored the Yankees 25-8 in a four-game sweep in New York last Sept. 5-8 when New York endured a seven-game skid and scrambled in the final weeks to edge Toronto for the second wild-card spot.

This time, the Blue Jays are outscoring the Yankees 18-4 in the series and are within seven games of the division lead. It is the closest Toronto has been to first place since being seven games out on June 7.

New York has lost six straight series for the first time since August 1995, when it needed a 21-6 finish to make the playoffs as a wild card under manager Buck Showalter.

This time, the Yankees had the cushion of once holding a 15 1/2 game lead on July 8.

“You can ask all these questions; we’ve answered them until we’re blue in the face,” he said. “We have to go out and do it. I have to quit answering these questions about this date, (about being perplexed), we have to play better.”

Since the start of last season, the Blue Jays are 13-6 in the Bronx, and their four-game winning streak follows a stretch of eight losses in 10 games.

On Sunday, Toronto will start right-hander Alek Manoah (12-6, 2.71 ERA), who is 2-2 with a 4.50 ERA in five starts since the All-Star break and allowed seven runs and 12 hits spanning 10 2/3 innings in consecutive outings against the Baltimore Orioles.

Nestor Cortes (9-4, 2.74), who allowed a three-run homer to Randy Arozarena four batters into Tuesday’s 3-1 loss and then pitched seven innings against Tampa Bay, will go for the Yankees.

The left-hander is 1-2 in nine career appearances (three starts) against Toronto and allowed two runs in six innings of a no-decision Sept. 9 when the Yankees were swept in four games at home by the Blue Jays.