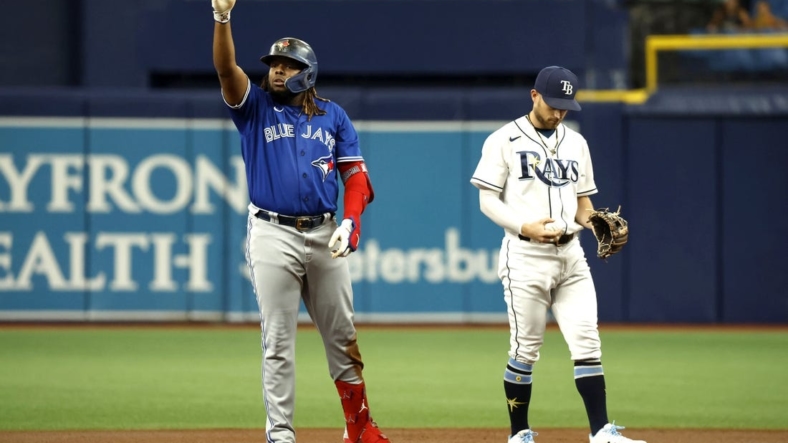 The Toronto Blue Jays and the visiting Tampa Bay Rays will both take overworked bullpens into a five-game series that starts Monday night.

The series has implications for the American League wild-card race and includes a day-night doubleheader on Tuesday that will put added pressure on both teams’ pitching staffs.

The Rays (78-60) got only two-thirds of an inning from starter Corey Kluber on Saturday and needed five relievers and a position player to complete the 10-3 loss to the host New York Yankees.

To compound matters, the Rays got only 1 1/3 innings from starter Luis Patino on Sunday in a 10-4 loss to the Yankees. They were able to complete the game with three relievers, thanks to five innings from Ryan Yarbrough.

“So appreciative of him being able to come in there and keep guys who shouldn’t be pitching in that type of game from doing that,” Rays manager Kevin Cash said. “It’ll set us up a little bit better going into a long series in Toronto.”

The Blue Jays (78-61) needed six pitchers in their 4-1 loss to the Texas Rangers on Sunday. It was intended to be a bullpen day, but they expected more than one-third of an inning from opener Trevor Richards.

“They were awesome, I think,” Blue Jays interim manager John Schneider said of his relievers. “Just a couple of pitches here and there and little bit of a rough start with Trevor (Richards).”

On Saturday, starter Kevin Gausman lasted only 5 1/3 innings in an 11-7 win over the Rangers in which Toronto needed four relievers.

The Blue Jays completed an 8-2 road trip on Sunday.

“We feel good. It was a great road trip,” Schneider said. “I really like where we are as a group.”

The Rays and the Seattle Mariners (79-61) are both a half game ahead of the Blue Jays in the AL wild-card seeding.

In the AL East, the Rays are 5 1/2 games behind the first-place Yankees with the Blue Jays six games out of first.

“It’s within reach,” Blue Jays reliever David Phelps said. “We have games against the teams that we need to beat. I’m not saying it’s going to be an easy task. We’ve got our work cut out for us, but we have the teams on our schedule that if we go out and do our job and play our best baseball, we really do have a chance.”

Right-hander Cooper Criswell (0-0, 0.00) will get the nod for the Rays. He has not made a major league appearance this season, but has posted a 1-1 record with a 3.77 ERA in 14 appearances (nine starts) with three minor league teams.