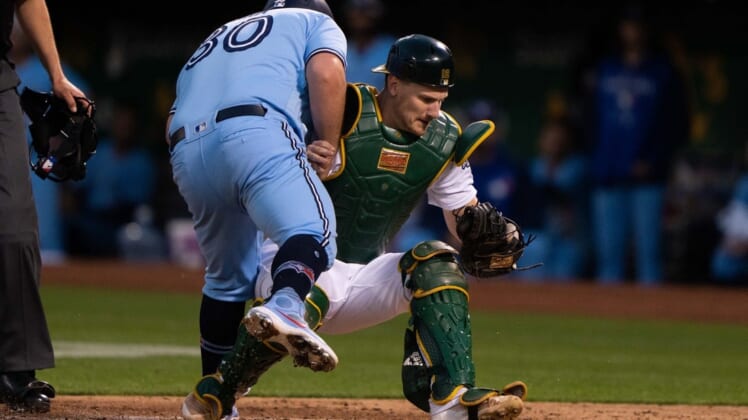 The Oakland Athletics will be shooting for their first home-series sweep of the season when they complete a three-game set against the Toronto Blue Jays on Wednesday afternoon.

Oakland received effective pitching from Cole Irvin and Adrian Martinez while recording 5-1 and 5-3 victories in the first two games of the series.

The A’s have swept the pair despite getting out-hit 15-11. Just two of Toronto’s 15 hits have come with runners in scoring position.

Oakland’s defense hasn’t given the visitors any help. The A’s played error-free ball in both games and came up with the play of the night on Tuesday. Alejandro Kirk was thrown out at the plate on a relay from left fielder Chad Pinder to second baseman Nick Allen to catcher Sean Murphy, thwarting a Toronto rally in the sixth inning.

“We stress playing a clean game, and it was,” A’s manager Mark Kotsay said. “The play that Nick made — the awareness, the instinct to take that ball and throw it home — that’s a good baseball play. That definitely helped us there.”

The A’s had lost 10 consecutive home series this season since opening their Oakland schedule by taking three of four from the Baltimore Orioles in April. The stretch included 11 losses in 12 home games before the Blue Jays came to town.

The last time the A’s swept a home series was their final one last season, when they surprised a Houston Astros team that was preparing for a trip to the postseason.

Coming off his best outing of the season, right-hander James Kaprielian (1-5, 5.43 ERA) will get the ball for the A’s in the series finale. He got into the win column for the first time this year when he limited the Seattle Mariners to one run and three hits in six innings in a 3-1 road win on Friday.

The 28-year-old has never faced the Blue Jays in his career.

Toronto’s scheduled starter Wednesday, right-hander Jose Berrios (6-4, 5.72), also will be riding the momentum of a strong performance in his latest start. He rebounded with a win on Saturday against the Tampa Bay Rays, allowing two runs in five innings, after getting pounded for a total of 14 runs in 6 2/3 innings in his previous two outings.

He took a 1-0 loss for the Minnesota Twins at Oakland in April 2021, allowing one run in five innings.

If Berrios needs help, the Blue Jays might turn to reliever Sergio Romo, a Bay Area favorite for his time with both the San Francisco Giants and the A’s. The veteran won three World Series championships with the Giants.

He made a cameo in the Monday game, facing one batter. He got Allen to line out to center field to end the sixth inning and keep the Blue Jays within 5-1.

“I come in here fearless, happy and appreciative,” Romo said. “I’m hungry, too. I want to win. I’ve been blessed with three rings. By the end of my career, I wouldn’t mind being able to say there’s four.”