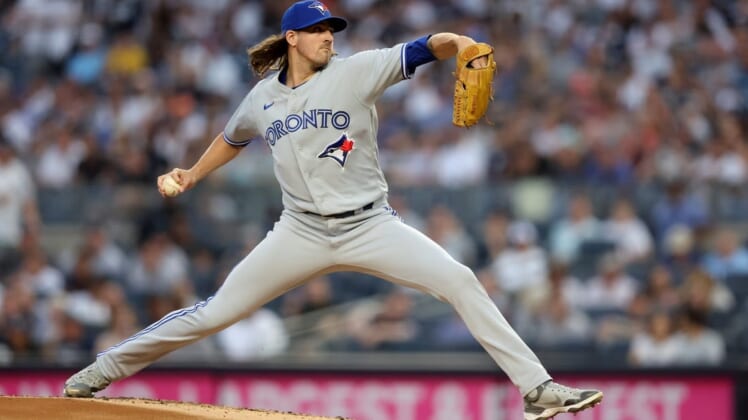 The visiting Toronto Blue Jays have to be feeling good as they enter Thursday with a chance to sweep the Boston Red Sox.

Not only have the Blue Jays taken 12 of 15 games from the Red Sox this season, but they will turn to a hot starting pitcher in the finale of the three-game series.

Kevin Gausman (9-9, 2.99 ERA) will look to duplicate both his most recent performance and his season-long success against the Red Sox.

The right-hander tossed seven shutout, four-hit innings with seven strikeouts on Friday against the New York Yankees. It was the third time in his past four starts that Gausman lasted at least six innings and held the opposition scoreless.

“I know it sounds bad to say, but we’re always trying to pitch better than the guy the night before,” Gausman said. “We try to use what he did well to our advantage. Obviously, my stuff compared to Jose Berrios is completely different, but I definitely take notes when he’s out there pitching. If they chase his changeup, I know they’re going to chase my split.”

Gausman has faced the Red Sox four times this season, going 3-0 with a 1.38 ERA and 37 strikeouts through 26 innings. Three of the four earned runs Boston has tagged him for came in the last meeting, but he still struck out 10 to earn the win on July 22.

Gausman has dealt 22 consecutive scoreless innings over his past three-plus road starts. The streak began at the end of his July 22 outing in Boston.

Berrios pitched six innings of two-run ball in his Wednesday start, beginning the Blue Jays’ 3-2, 10-inning win. Toronto has won six of its past seven games; Boston has lost five of its past six.

“If (Berrios) can continue to do what he’s doing down the stretch, that’s a huge shot in the arm for us,” Toronto interim manager John Schneider said.

Boston right-hander Kutter Crawford (3-5, 5.14 ERA) will make the start on Thursday. He has tossed a career-high six innings in four of his past seven starts, but the host Baltimore Orioles roughed him up for nine runs and 11 hits in 3 2/3 innings on Friday.

The 26-year-old rookie looks to return to the form that saw him produce a 3.20 ERA in his previous seven outings.

“Every time I take the ball, I try to go as deep in the game as possible and give my team the best opportunity to win,” he said.

In his last home outing on Aug. 13, Crawford limited the Yankees to two runs on two hits in six innings.

“The kid, he understands. He watches the game and he makes adjustments,” Boston manager Alex Cora said after the outing against New York. “I like how he attacked the opposition.”

His next opponent is similarly powerful. The Blue Jays have the top batting average (.262) and the third-most home runs (151) in the American League.

Toronto leadoff hitter George Springer, who is 15-for-25 (.600) in seven games since being activated from the injured list on Aug. 15, had the deciding double in Wednesday’s extra inning.

Boston’s run production all came off the bat of Franchy Cordero, who was recalled from Triple-A Worcester on Sunday. He hit a two-run homer, his second long ball in three games, and finished 2-for-3 on Wednesday.