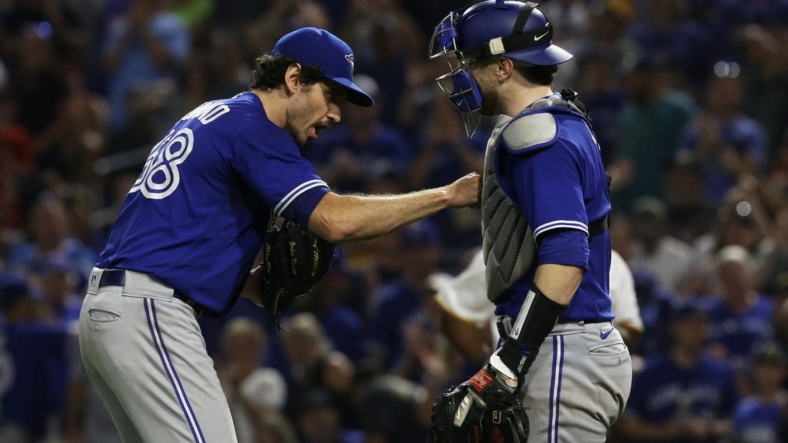 The visiting Toronto Blue Jays are employing some strategy this weekend that extends beyond their series against the Pittsburgh Pirates.

Toronto decided to take a bit of a risk with its plans regarding its starting pitchers in Pittsburgh, and so far, it’s paid off.

On Friday, Alek Manoah did his part, pitching not only well but also into the eighth inning in a 4-0 win to open the series. That took some pressure off the Blue Jays’ relievers, allowing for a bullpen game Saturday, where Toronto used a total of seven pitchers to improve to 11-5 across its last 16 games.

The Blue Jays will be looking to sweep the series Sunday and will send right-hander Ross Stripling (6-4, 2.94 ERA) to the mound to face Pittsburgh right-hander JT Brubaker (3-11, 4.39).

In turn, having Stripling go Sunday sets up Kevin Gausman and Jose Berrios for Monday’s doubleheader at Baltimore, with Mitch White and Manoah available to start the final two games against the Orioles, who are chasing Toronto for an American League wild-card spot.

“It’s easy to say, OK, you’re taking a non-division opponent or someone you’re not kind of right in the thick of a race with differently,” Blue Jays interim manager John Schneider said, referencing the struggling Pirates. “That’s not the case. You take matchups into consideration as well with how their lineup rolls out and who we have available. That plays a part of it as well.

“But when you’re at this point in the season, too, and, you know, you are right there with a handful of teams and you’re playing them quite a bit, you want to line up your guys against that team.”

Toronto second baseman Santiago Espinal left Saturday’s game after being hit by a pitch on the back of his left hand. The team reported that initial X-rays came back negative.

Pittsburgh has dropped three straight and 17 of its last 21 and has scored one run in two games this series.

Pirates manager Derek Shelton said Toronto’s strategies have been effective since they get its pitchers favorable matchups.

“It’s challenging,” Shelton said. “We hit some balls hard; we just didn’t get any balls to fall. But it’s a tough thing to navigate when (the opponent) is able to match up the whole time and (they) have a fresh bullpen because of the fact that Manoah was so strong (Friday).”

For the Pirates, Brubaker will come off paternity leave to make his 25th start.

In his most recent outing, Brubaker gave up six runs and nine hits in 6 2/3 innings in an Aug. 23 loss against Atlanta. He has never faced Toronto.

Stripling has been impressive over his past seven starts, going 2-1 with a 2.33 ERA. He last pitched against the Los Angeles Angels on Aug. 28, when he took the loss despite surrendering just three runs on seven hits in six innings while fanning six.

In six career games (two starts) against the Pirates, Stripling is 1-1 with a 4.00 ERA.