Fentanyl, cocaine ruled as cause of death for Baltimore Ravens player Jaylon Ferguson 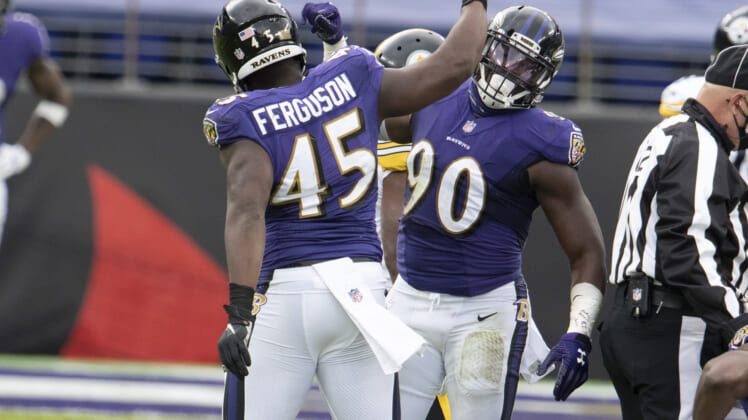 Baltimore Ravens linebacker, who passed away suddenly at the age of 26, died on June 21 from the combined effects of fentanyl and cocaine, according to the medical examiner.

A spokesperson for the Office of the Chief Medical Examiner announced Friday, per The Baltimore Sun, that the autopsy ruled Ferguson’s death as an accident and was directly caused by the combination of drugs found in his system.

The Baltimore Police Department was initially called to the scene on the night of June 21, responding to a house within the 400 block in Harwood. When they stepped inside the residence, they discovered paramedics treating an unresponsive Ferguson.

He never regained consciousness and was declared dead at the scene minutes later by paramedics. Following the announcement of his death, law enforcement indicated there were no signs of foul play or trauma and Ferguson’s ‘questionable death’ was being investigated.

“Our priority is focused on the man Jaylon was and the positive impact he made on so many as a father, son, fiancé, friend and teammate. It would be inappropriate for us to comment further while we continue to support his family and teammates, who are mourning the tragic loss of a loved one and will celebrate his life tomorrow.”

The medical examiner’s office said its written autopsy report is still not available, but the intent is to have it 90% completed within the next 90 days. Friends have created a GoFundMe page to help raise money for Ferguson’s children, as he left behind three young children.

A Louisiana native, Ferguson served as a rotational pass rusher on the Ravens’ defense in each of the past three seasons. He also holds the NCAA record for career sacks (45), thanks to a dominant 2018 season with 17.5 sacks at Louisiana Tech.