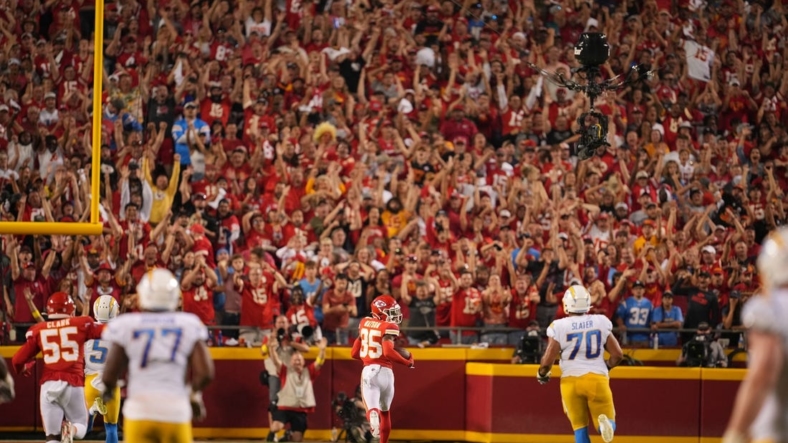 Rookie Jaylen Watson returned an interception 99 yards for a touchdown to help the Kansas City Chiefs rally for a 27-24 victory over the visiting Los Angeles Chargers on Thursday night.

Patrick Mahomes passed for 235 yards and two touchdowns for the Chiefs (2-0). Jerick McKinnon and Justin Watson caught touchdown passes as Kansas City defeated the Chargers for the 14th time in the past 17 meetings.

Justin Herbert threw for 334 yards and three touchdowns in addition to the costly fourth-down interception for Los Angeles (1-1). Herbert took a hit from Michael Danna with 5:01 remaining and played through pain in his left rib area for the rest of the contest.

The Chargers’ Mike Williams caught eight passes for 113 yards and one touchdown, and Zander Horvath and Joshua Palmer also had scoring receptions.

Jaylen Watson, a seventh-round pick this year out of Washington State, jumped the throw from Herbert to Gerald Everett, picked it off and raced downfield to give Kansas City a 24-17 lead with 10:29 remaining. The play matched the fourth-longest interception return in Chiefs history.

Later, Clyde Edwards-Helaire broke loose for a 52-yard gain and a 15-yard facemask penalty on Los Angeles’ Derwin James Jr. was tacked on to put the ball at the Chargers’ 18-yard line. The long run set by a 31-yard field goal by Matt Ammendola that increased Kansas City’s lead to 10 with 3:20 to play.

Herbert pulled the Chargers within three on a 7-yard scoring pass to Palmer with 1:11 left. Kansas City recovered the ensuing onside kick and ran out the clock.

The Chargers took a 17-7 advantage when Williams made a one-handed catch of Herbert’s throw for a 15-yard scoring pass with 9:52 left in the third quarter. Williams made the grab despite tight coverage by Kansas City’s L’Jarius Sneed.

It took the Chiefs just 2 1/2 minutes to respond as Mahomes drilled a 41-yard touchdown pass to Justin Watson, who beat J.C. Jackson to pull Kansas City within three.

Ammendola kicked a 19-yard field goal to knot the score at 17 on the first play of the final quarter.

The Chargers led 10-7 at halftime.

Dustin Hopkins kicked a 31-yard field goal to cap Los Angeles’ first drive, and Herbert threw a 1-yard scoring pass to Horvath on the first play of the second quarter.

Kansas City got on the board when Mahomes tossed a 9-yard scoring pass to McKinnon with 11:38 left in the half.