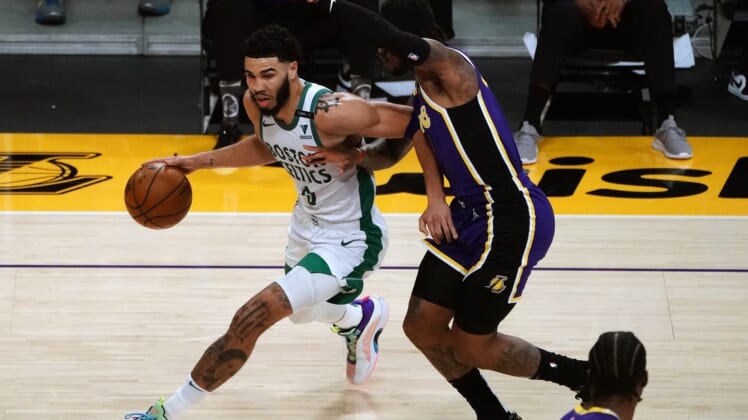 Jaylen Brown scored 40 points and grabbed nine rebounds as the Boston Celtics closed out a perfect road trip with a 121-113 victory over the Los Angeles Lakers on Friday.

Brown finished 17 of 20 from the field and at one point made 11 consecutive shots.

The Celtics, who wound up 3-0 on the trek and earned their fifth straight win overall, never trailed in the game. The lead was 27 points early in the fourth quarter before the Lakers’ bench made the final margin closer.

Ben McLemore chipped in 17 points off the Los Angeles bench. The Lakers got 13 points from Kyle Kuzma, 12 from Montrezl Harrell and 10 from Alfonzo McKinnie.

The Lakers allowed fans into Staples Center for the first time this season, but the 1,915 in attendance didn’t have much to cheer about early on as the Celtics raced out to a 14-2 lead.

Boston led by as many as 14 in the opening quarter, but the Lakers whittled the deficit to eight points by the end of the first.

The Celtics shot a sizzling 56.5 percent from the field overall. The Lakers, with the second-best defense in the NBA in terms of opponents’ scoring, had trouble keeping Boston out of the paint offensively. Boston ended with a 58-50 edge on inside scoring.

Boston avenged a 96-95 home defeat against Los Angeles on Jan. 30 and won for the seventh time in eight games overall.

While the Lakers have lost five of their past nine games, the team did receive some good news. Anthony Davis received an evaluation from club doctors and was cleared for full-contact practices, which means the versatile big man is close to returning to the starting lineup.

Davis has missed 28 games since sustaining a right calf strain. Coach Frank Vogel said the star forward will be on a 15-minutes restriction when he returns to the lineup, which could be by the end of the month.