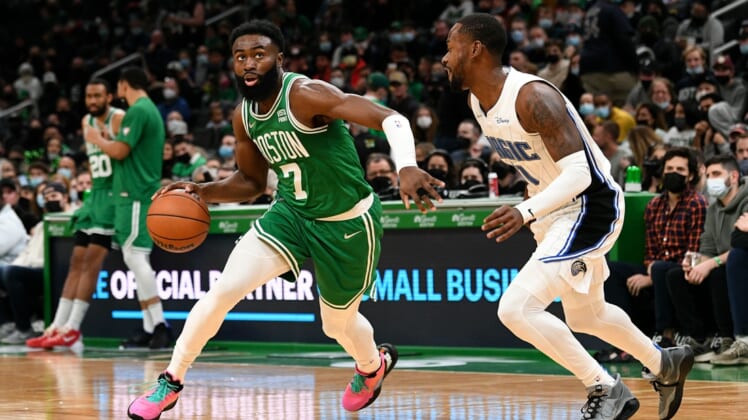 Jaylen Brown scored 21 of his career-high 50 points in the fourth quarter and grabbed 11 rebounds to help the Boston Celtics rally past the visiting Orlando Magic for a 116-111 overtime win on Sunday night.

Dennis Schroder had 21 points and seven assists in his return from the NBA’s COVID-19 health and safety protocol and Marcus Smart added 17 points with seven helpers for the Celtics.

Boston won its second straight game following a 123-108 victory over powerhouse Phoenix on New Year’s Eve. It marked the first time the Celtics won consecutive games since Nov. 28 and Dec. 1.

Terrence Ross had a season-high 33 points off the bench and Gary Harris scored 23 to lead Orlando, which blew a 14-point lead late in the fourth quarter to suffer its fifth consecutive defeat.

Ross suited up for the first time since Dec. 15 versus Atlanta after clearing the COVID protocol along with Magic teammates Mo Bamba, Hassani Gravett and Mychal Mulder.

Boston led 45-42 at halftime but fell into a double-digit hole after being outscored 35-20 in the third quarter.

Orlando led 96-82 after Wagner’s layup with 4:20 remaining in the fourth before Boston rallied with a 16-2 surge to tie the game at 98 on Brown’s two-point basket with 37.8 seconds to play.

After a Magic five-second violation, Brown put the Celtics ahead 100-98 with another bucket with 30.9 left before Frazier’s layup re-tied it with 21.8 seconds to go.

Brown missed a 20-foot pull-up jumper just before the buzzer to send the game to OT.