The New Orleans Pelicans are a mess, and pretty much anything that happens the rest of the season won’t be surprising. A Jaxson Hayes trade could be part of this.

New Orleans’ 2019 second first-round draft selection hasn’t panned out to be its center of the future. It’s a combination of inconsistency on Hayes’ end and the team blocking his path by acquiring Steven Adams — who was then traded for Jonas Valanciunas. At the same time, Hayes has flashed some potential in the paint and had his moments. He’s a compelling reclamation project.

The Grizzlies look as good as ever under Taylor Jenkins this season to the point where their goal should be to win at least one, if not two playoff series. In an attempt to both beef up their roster and add long-term depth, Memphis can trade for Hayes.

Coming off the bench, Hayes would be giving the Grizzlies a player with the talent to backup Adams, who he was ironically teammates with last season, and further the reliability of the second unit. The combination of Tyus Jones, De’Anthony Melton, Kyle Anderson, Brandon Clarke and Hayes would make for a sturdy and balanced group.

Playing for a contender could give Hayes, whose career needs a change of scenery, new life. The center is under contract for at least a year and a half. Furthermore, it’s not out of the realm of possibility to think he could accept a qualifying offer for the 2023-24 NBA season; Hayes could be in Memphis for multiple seasons.

Memphis upgrades inside with Hayes while sending Tillman and Konchar to New Orleans. The pair of players could become rotation players for the Pelicans.

All that said, the Grizzlies may prefer to stick with what’s in the building, especially as it relates to a minor rotation upgrade.

The NBA world is waiting for the Pacers to trade their starters, specifically Myles Turner, Caris LeVert and Domantas Sabonis. With that in mind, Hayes could be part of a Pacers’ rebuild.

In the scenario the Pacers trade the house either before the NBA trade deadline or finish doing as such in the offseason, Hayes could split time in the paint with rookie Isaiah Jackson. The two big men would push each other and could potentially become a respectable center tandem. Heck, maybe the opportunity to get more minutes sees Hayes outright earn the starting center position?

One figures that Indiana gets a combination of wings and draft picks for their starters. Acquiring Hayes would be the team turning players who aren’t part of their future into a player who could be part of what’s ahead.

As it concerns the trade, Bitadze and Brissett give the Pelicans depth and players to experiment with while the front office adds a future second-rounder for its troubles.

The factor that could stop the Pacers from trading for Hayes, though, is them simply preferring to sell and not make parallel moves.

The Spurs have a lot to sort out, as they have a young, wing-heavy roster. They can resolve that situation and still strengthen another part of their roster by trading for Hayes.

Jakob Poeltl is a sturdy and continually improving force in the paint. At the same time, head coach Gregg Popovich could use a player with starting upside to back up Poeltl. Hayes has never been a high-minute player in the NBA. With San Antonio living on the edge of NBA Play-in Tournament seeds, chances are they’ll have minutes for the taking after the trade deadline. 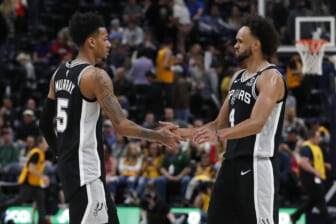 For the most part, the Spurs have done a respectable job of developing young players. The issue has been most of their players operate on the same part of the floor. Maybe Hayes develops into a legitimate inside player who draws fouls and makes the Spurs less predictable, so to speak, on the offensive end?

Jones doesn’t have a firm role with the Spurs and could become a rotation player with the Pelicans. Bates-Diop could be rerouted, and a future second-rounder is an extra assist for their sake.

This trade has minimal risk for the Spurs. They get to experiment with a former top-10 pick in Hayes and still make a blockbuster trade for an established player.