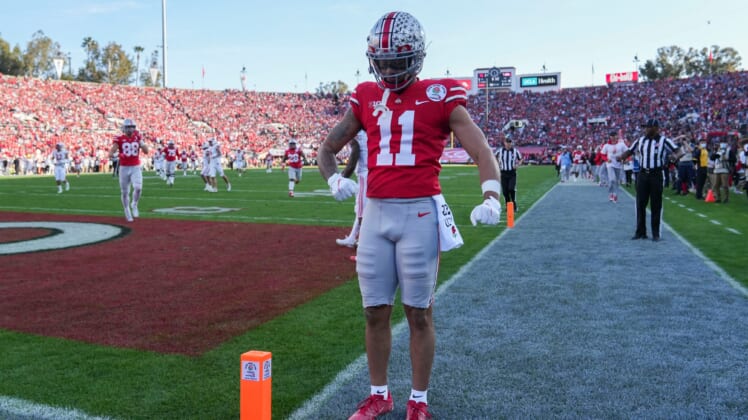 Ohio State Buckeyes wide receivers Garrett Wilson and Chris Olave will be first-round picks in the 2022 NFL Draft. But sophomore Jaxon Smith-Njigba is showing why he is the best receiver in college football with a Rose Bowl performance for the ages.

The Buckeyes needed their sophomore sensation more than ever on Saturday night. Facing the Utah Utes in the Rose Bowl, Ohio State took the field without Wilson and Olave. Both 1,000-yard receivers opted out to prepare for the NFL Draft, meaning Heisman Trophy finalist C.J. Stroud would be relying on Smith-Njigba more than ever before.

With the Buckeyes trailing 21-7 midway through the second quarter, Smith-Nigba came through with his first big play of the night. He created separation from Utah’s cornerback almost instantly and fought off an attempted tackle as he sped towards the end zone to make it a one-score game.

One of the best defenses in college football tried to make adjustments at halftime. But with the game on the line, Stroud found his go-to weapon in the end zone and the most dangerous quarterback-receiver combo in the nation delivered their third touchdown of the game.

Before Saturday night, Keyshawn Johnson (212 receiving yards) had the record for most receiving yards in Rose Bowl history and it was broken in three quarters. With four minutes still left in the game, Smith-Njigba had already delivered the best single-game performance by a receiver in Buckeyes’ history. But he wasn’t done yet.

After the Utes tied the game, Ohio State got the football back with 1:54 remaining. Utah knew exactly where the football was going and still couldn’t stop it, with Njigba-Smith hauling in two receptions for 19 yards to set up the game-winning field goal.