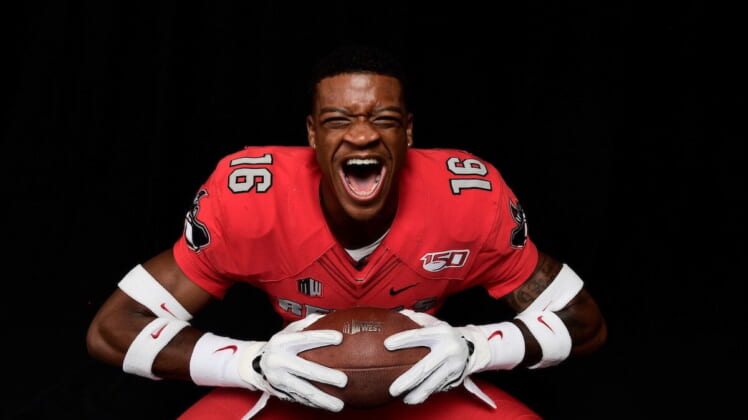 With the NFL and college football changing, and quickly moving to players who can occupy multiple and hybrid roles, former UNLV safety/linebacker and Raiders free agent Javin White might be one of the steals of this year’s undrafted free agent crop.

In today’s NFL, with the uptempo pace of the game and influx of pass-catching running backs and athletic tight ends, defenses must cover holes in the middle of the field. The Las Vegas Raiders have struggled in that area, but this offseason, team brass made a concerted effort to upgrade the linebacker position including the acquisition of undrafted free agent linebacker Javin White.

The Raiders signed linebackers Cory Littleton and Nick Kwiatkoski during free agency and then added Tanner Muse in the third round of the draft. The club’s push to revamp the second level of the defense didn’t stop there. Javin White had an offer from the Dallas Cowboys, but he chose the Raiders who kept tabs on him and aggressively pushed to sign the 6’2″, 211-pound hybrid defender.

“I thought it would be a great way to brand myself and help the Raiders being a UNLV hometown kid,” White said on Silver and Black Today on CBS Sports Radio 1140 this past weekend. “I’m a loud, outgoing guy and I just love the game of football and that’s what the Raiders are. They are a team that displays what football is.”

At UNLV, White played safety for three terms and then transitioned to linebacker for his senior campaign. He recorded 79 tackles, 8.5 for loss, 1.5 sacks, three interceptions and 10 pass breakups. Despite the position switch, the rangy defender remained effective in coverage and maintained his tackling technique.

While his versatility stands out, White also possesses the intangibles that would attract general manager Mike Mayock to a rookie talent. The Raiders executive often talks about the importance of culture when building a football team. The undrafted rookie’s mindset and his passion for the game certainly fit the description.

I’m so grateful to just stay in Vegas and the city has treated me so well in my five years here…I’m just so happy to be able to wear that silver and black and represent UNLV too. – Raiders rookie LB Javin White

“Like Coach Gruden said,” White said during the radio interview. “It’s really about the tradition. When you look at Raiders tradition – guys like Howie Long – you look at so many guys that played for them and man those guys were tough. And that’s what Coach Gruden is trying to bring back to the Raiders.”

“He came in being a leader, and he’d get on the guys when they’d loaf in, and he’s real talkative on the field,” Peters said. “He’s a great leader, so like I said, he’s competitive and didn’t want anyone to outshine him. He’s going to put in the extra work. He’d always stay late after practice, all that kind of stuff; whether it was running routes, or backpedaling when we changed his position.”

Mayock and head coach Jon Gruden didn’t want to lose the youngster to the Cowboys. As for Javin White, the changes at the position could allow him to slide into a back-end roster spot despite an irregular offseason that’s kept players off the practice field because of coronavirus restrictions.

Among the notable names at linebacker, we can mark Littleton and Kwiatkoski as locks for the regular-season roster. Assuming Muse stays healthy, he’ll likely make the final depth chart as well. The team signed Nicholas Morrow to a one-year, $3.3 million tender in April. Marquel Lee heads into a contract term.

Although Morrow took on a bigger role for most of the 2019 season, his snap count dropped below 50 percent in each of the final four weeks of the campaign. Still, he lined up for 728 plays on defense, which is more than Lee has played in three years (689).

Javin White said the Raiders will play him at linebacker, which turns up the heat on Lee’s roster spot, which already seemed shaky with Muse set to learn the Mike and Will roles. How does he feel he will do making the adjustment from those positions in college to what the Raiders need him to do in the NFL?

“I think of the situation and think of it like I’m just a ballplayer,” White said. “I don’t care where you put me. You can even fit me in at D-line and I’m going to prosper because I’m meant to play football. I think it’s a great attribute that I have that I’m able to play most in positions.”

Although White transitioned to playing more linebacker in his senior season at UNLV, he said the biggest adjustment he foresees in his challenge to make the Raiders is playing in a different part of the field then he’s accustomed to.

“The biggest transition right now is probably playing more inside the box,” Javin White said. “At UNLV I was more of an outside linebacker and I’m still there for the Raiders but your technique is different (playing more inside) and at the end of the day its football and you have to go play it.”

As the NFL goes through a virtual offseason with uncertainty concerning practices, White will find it difficult to shine before training camps open late July, though his self-assurance sounds like he’s prepared for whatever obstacles await him.

In 2019, the Silver and Black went into the season with four linebackers on the roster: Tahir Whitehead, Burfict, Morrow and Lee. Muse and Morrow would likely round out the top four this year, but White’s ability to play safety could keep him on the active roster.

White will probably add weight to his 6’2″, 211-pound frame to play the position. If he doesn’t lose his agility, the Raiders would have great depth at the weak-side linebacker spot, another defender to cover tight ends and chase down running backs that slip out on short routes in the passing game.

Initially, Javin White would have to flash on special teams, which is a feasible pathway to a roster spot because of his quickness and tackling ability. He could follow in Morrow’s footsteps as a collegiate safety who goes undrafted and becomes a Raiders linebacker.

The Oakland native grew up with the Raiders in his area. Ironically, he could become a favorite to the locals in Vegas following a productive collegiate career at UNLV.