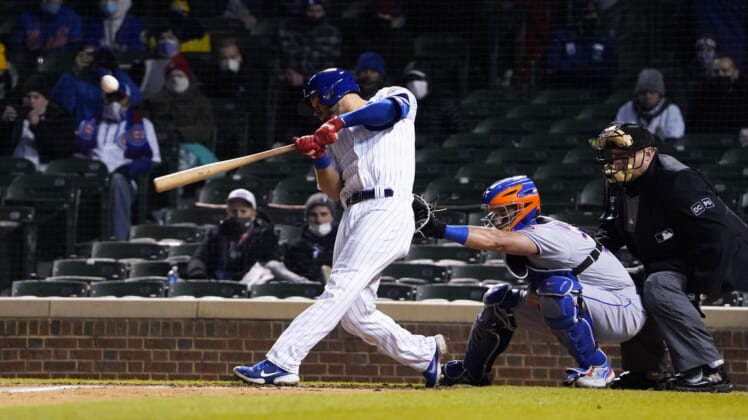 David Bote had two hits and four RBIs for the Cubs, and Matt Duffy had three hits and three RBIs.

Chicago earned its third win in four games behind a season-high offensive output that started with a seven-run fourth inning.

After managing just one baserunner against Mets left-hander David Peterson in the first three innings, the Cubs erupted in the middle part of the game.

Anthony Rizzo opened the scoring in the fourth with an RBI single — Chicago’s third straight hit with one out — before an error by Mets third baseman J.D. Davis allowed Baez to reach.

Duffy followed by drawing a bases-loaded walk, setting the stage for Bote’s two-run single on a misplayed fly ball to short right field, an RBI groundout from Jake Marisnick and run-scoring singles by Eric Sogard and Ian Happ.

New York committed three errors in the inning and has made six overall while losing the first two games of the series.

Pete Alonso powered a two-run homer out of Wrigley Field and onto Waveland Avenue with no outs in the fifth to bring the Mets to within 7-4, but New York came no closer while losing for the third time in four games. Baez belted his slam in the sixth against Trevor Hildenberger.

Alec Mills (1-0) pitched three innings of one-hit, shutout relief to earn the victory. He struck out two, the same as Davies’ total.

Every starting Cubs position player had at least one hit. Willson Contreras went 2-for-5 as Chicago outhit New York 13-10.

Francisco Lindor paced the Mets, going 3-for-4 with an RBI. Davis had two hits and an RBI.

New York’s Brandon Nimmo (right hip stiffness) did not start in center field but was available off the bench. Kevin Pillar played center in Nimmo’s place, and Jeff McNeil occupied the leadoff spot.