Javier Baez — the villain of the home fans earlier in the game — scored the winning run in the bottom of the ninth inning, leading the host New York Mets to a 6-5 walk-off win over the Miami Marlins on Tuesday afternoon.

The Mets entered the ninth trailing 5-1. Miami used three pitchers in the ninth to try to stop the Mets, who got a two-run home run from Brandon Nimmo and Baez’s RBI infield single to set up the final play.

Facing Dylan Floro (5-5), Michael Conforto hit an opposite-field single to drive in Pete Alonso. After a bobble by catcher-turned-left fielder Jorge Alfaro, Baez kept coming and scored on a head-first dive, just a split-second ahead of the tag.

Baez had drawn boos from Mets fans earlier in the game because of his “thumbs down” gesture directed at them on Sunday.

Since this was the resumption of a game that was started on April 11 and postponed due to rain, Marlins rookie Bryan De La Cruz was credited with his first major league hit. De La Cruz, who was in the minors when this game was started four months ago, actually entered Tuesday with 33 hits and a .355 batting average.

Miami opened the scoring in the second inning. Jazz Chisholm hit a leadoff double and scored on a single by Miguel Rojas, who took second on the throw home. Rojas then scored on De La Cruz’s single. Both runs were scored on shallow hits as Miami took advantage of weak throws by Mets left fielder Dominic Smith.

The Marlins made it 3-0 in the fifth as Alex Jackson was hit by a pitch, advanced to third on Brian Anderson’s single and scored on Chisholm’s wind-blown, ground-rule double. 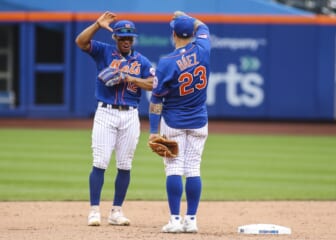 New York got on the board in the bottom of the fifth on Jonathan Villar’s leadoff homer. The Mets went on to load the bases with one out in the inning, but Smith popped out and Alonso struck out on a 3-2 pitch that was high and wide.

Miami extended its lead to 5-1 in the sixth as the wind was a factor again, this time on Jesus Aguilar’s two-out, two-run bloop double. The Mets avoided injury on the play when second baseman Jeff McNeil dove for the ball just in front of right fielder Conforto. First baseman Alonso was also in pursuit.

Jeurys Familia (8-3) earned the win after pitching a scoreless top of the ninth with two strikeouts.