The Jacksonville Jaguars made it official Wednesday, anointing 2021 No. 1 overall pick Trevor Lawrence as their starting quarterback for the season opener.

The Jaguars open their season at the Houston Texans on Sept. 12.

The decision was expected but Meyer maintained even two weeks ago that the quarterback competition was open between Lawrence and Gardner Minshew II. The pair split first-team reps throughout training camp. 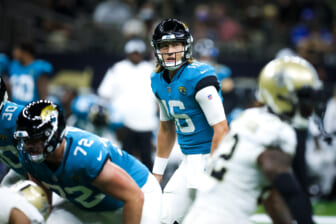 Minshew went 7-13 as the Jaguars’ starter over the past two seasons, completing 62.9 percent of his throws for 5,530 yards with 37 touchdowns and 11 interceptions during that span.

The news comes a day after the Jaguars announced that their other first-round pick, running back Travis Etienne, will miss the entire season with a Lisfranc injury.