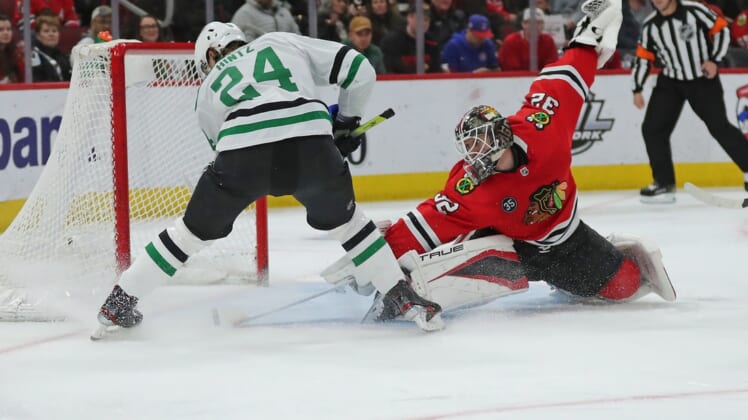 Jamie Benn, Joe Pavelski, Roope Hintz and Tyler Seguin each got a goal for Dallas, while Hintz and Ryan Suter had two assists.

Philip Kurashev, Jonathan Toews, Boris Katchouk and Kirby Dach scored once each for the home team and Patrick Kane had two assists.

Early in the first period, Riley Steelman received a two-minute minor for kneeling on Alex Radulov. In the last second of the PP, Jamie Benn scored on a backhand shot to give Dallas a 1-0 lead.

Philip Kurasev answered back and got Chicago on the board with a deflected shot 8:09 into the first to tie it 1-1.

Then it was DeBrincat’s turn to sit in the box after getting an interference call against Luke Glendening. The Stars took the lead once more, after Joe Pavelski evened it up on a tip-in with 6:15 left in the period. Seguin and John Klingberg got assists on the goal.

Just 1:47 into the second period Hintz got a wrister past Blackhawks goalie Kevin Lankinen to make it 3-2 Dallas.

At the 9:11 mark of the second, Boris Katchouk would get a slap shot that slipped through Oettinger’s legs to tie it 3-3.

Dallas didn’t waste time answering, after Jason Robertson scored two minutes later to give the Stars another one goal lead.

Robertson scored again 14:37 into the second to make it 5-3 Dallas.

The Blackhawks switched goaltenders in the 3rd period, with Collin Delia replacing Lankinen.

Seguin got the wrap around with 4:35 left in the third to give Dallas a 6-3 lead.

Chicago wasn’t finished, when Kirby Dach narrowed the Stars’ lead to make it 6-4 at the 17:03 mark of the third.

The Hawks pulled their goalie soon after, but failed to tie it up. Shots were 40-30 in favor of the hosts.