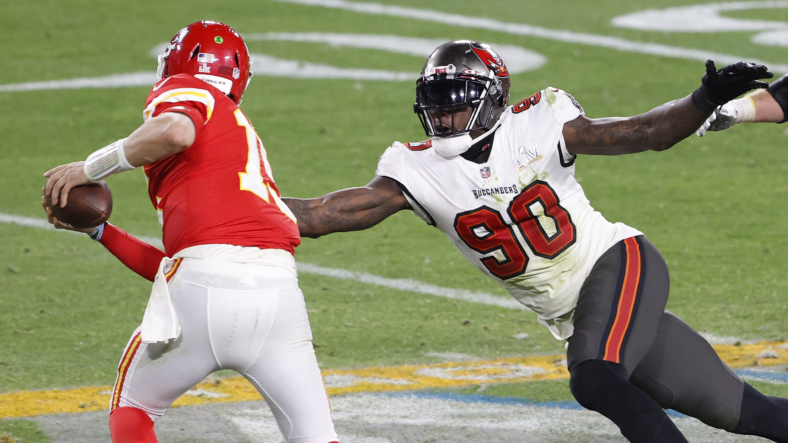 Looking to continue adding to their roster after a loss that saw them give up 42 points, the Baltimore Ravens brought two-time Super Bowl winner Jason Pierre-Paul in for a workout on Tuesday. Today, the three-time Pro Bowl edge rusher has announced he’s officially signing a one-year contract with the Ravens, according to Josina Anderson. The contract is worth up to $5.5 million.

Pierre-Paul is coming off an offseason shoulder surgery after starting 12 games for the Tampa Bay Buccaneers in 2021. He tallied just 2.5 sacks, to go with 31 tackles and a forced fumble a season ago. Now that he’s back to 100%, JPP should be able to get back to pressuring quarterbacks on a more frequent basis. He’ll get his first chance to do so with the Ravens.

While it shouldn’t take Pierre-Paul to learn his tasks within the Ravens’ defense, getting back up to speed and in football shape could take a week or two before we see him much in uniform, on the field during gameday.

While JPP has a total of 137 starts under his belt during his 13-year NFL career, he isn’t expected to start for John Harbaugh. His signing seems to be in response to veteran outside linebacker Steven Means tearing his Achilles in the team’s Week 2 loss.

Instead, Pierre-Paul figures to be the team’s top backup pass-rusher, spelling the 36-year-old Calais Campbell and maybe teaching a few tricks to second-year pro Odafe Oweh. The Ravens also have former All-Pro Justin Houston on the roster. Between Campbell, Houston, and Pierre-Paul, the Ravens have three players with a total of 290 sacks between them. Pierre-Paul himself has notched 91.5, including two seasons with double-digit sack performances when he was with the New York Giants.

While none of them are at their peak performance, if Ravens defensive coordinator Mike McDonald figures out a way to make all four of their pass-rushers successful, opponents in the AFC North could be in for a long season. We already know Joe Burrow‘s been sacked 13 times. The Ravens hope to keep seeing that total rise, especially in head-to-head matchups. Only now they have one more experienced rusher to help.

Related: See how the Baltimore Ravens compare in the 2022 NFL Power Rankings