Jason Day of Australia posted the low round of the day, an 8-under 62, to grab the 36-hole lead Friday at the Travelers Championship in Cromwell, Conn.

Day, the former World No. 1 who has slipped to 71st in the Official World Golf Rankings, sank eight birdies without a bogey in his second round to reach 9 under for the event. Bubba Watson (66 Friday) and first-round co-leader Kramer Hickok (69) are one behind.

The highlight of Day’s round was a 36-foot, 5-inch birdie putt on the par-3 fifth hole at TPC River Highlands. It broke left to right and found the side of the cup, marking his seventh of eight birdies after he began on the back nine.

Day credited a recent switch back to a Spider putter he used to use.

Day is searching for his first PGA Tour win since the 2018 Wells Fargo Championship. 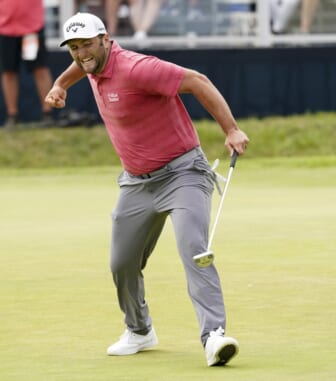 Watson, the two-time Masters champion, shot 4-under 66 for the second straight day to pull into contention, aided by three consecutive birdies from holes No. 5-7. He won the Travelers in 2010, 2015 and 2018.

“Obviously with the new design there (are a) couple bunkers that are tricky,” Watson said of TPC River Highlands. “As long as you stay out of the bunkers you can still move the ball forward and you feel like you have a chance to hit the green. That’s really what I’ve felt over the years, is that I can play no matter where the ball ends up.”

Watson smashed his drive on No. 2 294 yards down the left fairway — only to realize the head of his driver had flown off the hosel. It didn’t reach the crowd or hit anybody inside the ropes.

He said it wasn’t the first time it had happened, either.

“But if I was going to hit anybody I was hoping it would be Brooks (Koepka),” Watson joked. “But I missed him though. Not that good of an aimer.”

Watson finished the hole with one of his five birdies.

Like Day, Watson hasn’t won on tour since 2018, when he captured his third Travelers title.

A group of seven players tied for fourth at 7 under includes Kevin Kisner and England’s Justin Rose, each of whom shot 63, as well as Russell Henley, a co-leader after the first, second and third rounds at last week’s U.S. Open. FedEx Cup points leader Patrick Cantlay is part of a tie for 11th at 6 under.