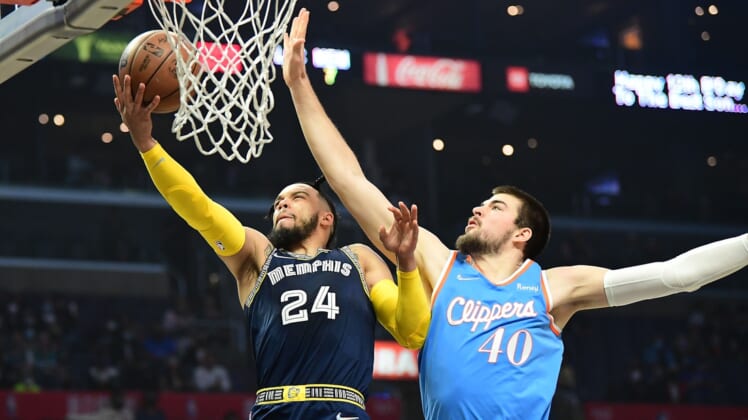 Memphis began the first leg of a weekend back-to-back in Los Angeles with leading scorer Ja Morant sidelined due to a thigh injury. With Morant’s production missing (25.0 points, 6.6 assists per game this season), the Grizzlies struggled early and fell behind by as many as 12 points in the first quarter.

A 10-0 run early in the second quarter sparked a 38-20 period for Memphis, and the visiting Grizzlies never trailed in the second half en route to their eighth straight win.

Despite the team going just 44-for-100 from the floor and 12-for-38 from the floor, Memphis had four players score at least 18 points. Tyus Jones scored 18, dished five assists and grabbed five rebounds, and Brandon Clarke came off the bench for an 18-point, game-high 15-rebound double-double.

Melton helped fill a void in the backcourt with Dillon Brooks pulled less than a minute into the second quarter. Brooks sustained an apparent ankle injury on a fast break that required him to be helped off the floor.

Marcus Morris Sr. scored a game-high 29 points for Los Angeles, which included 4-of-6 shooting from 3-point range. The Clippers went just 10-for-32 from beyond the arc as a team, and Reggie Jackson (18 points) and Brandon Boston Jr. (13) off the bench were the only other Clippers to score in double figures.