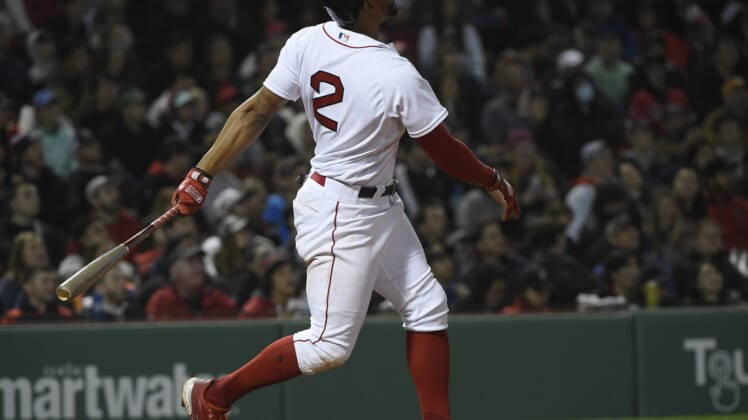 Jared Walsh’s two-run home run broke a scoreless tie in the seventh inning and preceded a five-run eighth that lifted the Los Angeles Angels to an 8-0 win over the host Boston Red Sox on Thursday afternoon.

Walsh went 2-for-4 with four RBI and a run scored for the Angels, who claimed the three-game series with back-to-back wins.

Shohei Ohtani (3-2) pitched seven scoreless innings and gave up six hits with 11 strikeouts. He also went 2-for-4 with an RBI and a run scored.

Walsh capped the big inning with a soft two-run single through a shift on the left side. His final knock came after David Fletcher and Ohtani singled and Anthony Rendon hit a soft grounder, all plating runs.

Brandon Marsh, who also had two hits and scored twice, added a solo homer in the ninth.

The game started as a classic duel between Ohtani and Boston’s Rich Hill, the latter who allowed just one hit, one walk and struck out six over five scoreless frames. It was the 42-year-old lefty’s longest start of the season.

Hill opened his 200th MLB start with three straight 1-2-3 innings before walking Taylor Ward to lead off the fourth and allowing a hit to Ohtani two batters later.

Ohtani made his first-ever pitching start at Fenway Park. Jackie Bradley Jr. went 2-for-3 with a double.

However, a Boston baserunner didn’t reach third base until J.D. Martinez lined a one-out double to left and advanced on a ground ball in the sixth. The frame ended without any damage done thanks to shortstop Andrew Velazquez’s leaping catch to deny Franchy Cordero of a two-out hit.

Walsh finally broke the scoreless deadlock in the seventh inning by golfing a two-run homer just inside Pesky’s Pole. Anthony Rendon drew a one-out walk before scoring on Walsh’s second long ball in as many games and just the second Angels hit of the afternoon.

Boston’s Tanner Houck (2-2) was the loser, though he bounced back to retire the next two batters after Walsh’s homer and struck out four in 1 2/3 innings piggybacking Hill.

An inning after Walsh’s homer, the visitors more than doubled their lead by scoring three runs before Houck got pulled without recording another out.