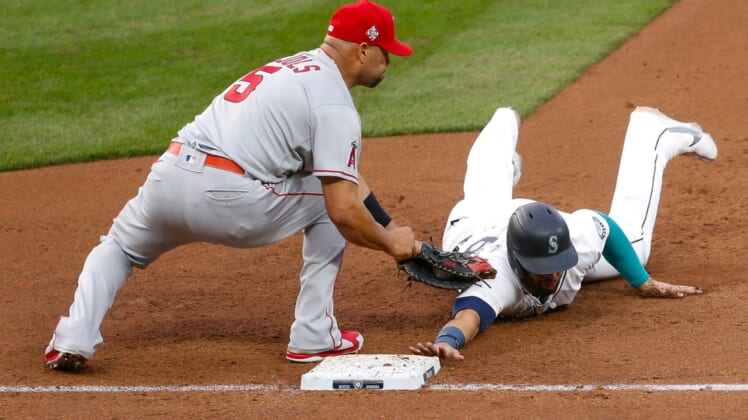 Angels right-hander Griffin Canning (2-2) pitched 5 1/3 innings and allowed just three hits and an unearned run. He walked two and struck out nine, one shy of his career high.

The Angels built a 10-1 lead through four innings.

Los Angeles got going early against Mariners right-hander Ljay Newsome (1-1), who was making his first start of the season after lefty Nick Margevicius was placed on the 10-day injured list earlier this week due to left shoulder inflammation.

With one out in the top of the first, Shohei Ohtani walked and Trout followed with a home run to center field, his seventh of the season.

An out later, Walsh homered to left-center field to make it 3-0.

The Angels scored five more runs in the second.

Jose Iglesias and Max Stassi opened the frame with singles, and David Fletcher advanced the runners with a sacrifice bunt. Ohtani grounded out to first, with Iglesias scoring on the play. An intentional walk to Trout put runners on the corners, and Rendon followed with a two-run double to center field. Walsh hit the next pitch out to right to make it 8-0.

Newsome allowed eight runs on seven hits in two innings, with two walks and one strikeout.

Seattle scored an unearned run in the third after Tom Murphy reached on a one-out throwing error. J.P. Crawford lined a run-scoring double to right.

The Angels scored again in the fifth as Rendon hit a two-out, two-run shot to make it 10-1.

The Mariners scored twice in the eighth. Haniger reached on a fielding error and Ty France walked. Sam Haggerty grounded into a double play, but Kyle Lewis singled and Jose Marmolejos walked to load the bases. Dylan Moore then lined a two-run single to center.

Haniger hit a two-run homer in the ninth to cap the scoring.