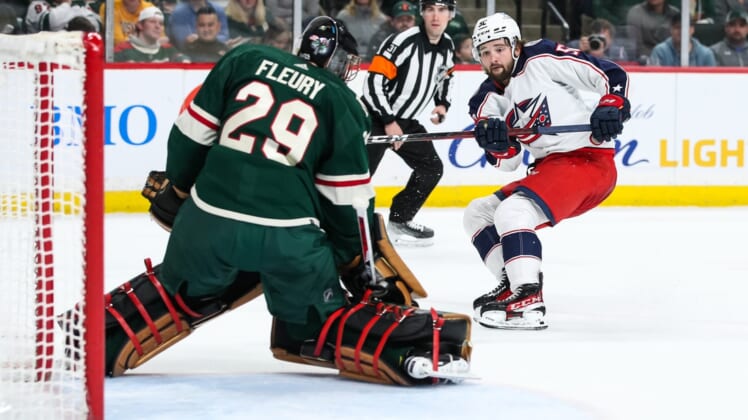 Jared Spurgeon scored 1:24 into overtime to lift the Minnesota Wild to a 3-2 win over the visiting Columbus Blue Jackets on Saturday night in Saint Paul.

Kirill Kaprizov added two goals for Minnesota, including the tying score with 1:03 remaining in regulation to begin the dramatic comeback. The Wild won their fifth game in a row.

Veteran goaltender Marc-Andre Fleury earned the win in his team debut for Minnesota. Fleury, whom the Wild acquired from the Chicago Blackhawks before the trade deadline, stopped 23 of 25 shots.

Jake Bean and Jakub Voracek scored one goal apiece for Columbus. The Blue Jackets wrapped up their three-game road trip with an 0-1-2 record.

The late meltdown spoiled a strong performance from Blue Jackets goaltender Elvis Merzlikins, who made 35 saves on 38 shots.

Spurgeon turned to his backhand for the winning goal against Merzlikins.

Columbus led 2-1 late in the third period when Minnesota evened the score at 2-2 late in regulation. Kaprizov fired a shot through a screen set by Joel Eriksson Ek, and the puck found the back of the net for his second goal of the game and his team-high 35th of the season.

Kaprizov lifted both arms into the air after the goal, which came from a sharp angle at the bottom of the left circle. The Wild had pulled their goaltender for an extra attacker to set up a 6-on-5 advantage.

The Wild opened the scoring on the power play 8:34 into the first period. Mats Zuccarello zipped a pass to the right side of the crease for Kaprizov.

Minnesota stayed on top until midway through the second period, when Columbus pulled even on Bean’s fifth goal of the season. He was one of several players battling for a loose puck in front of the net.

The Blue Jackets grabbed a 2-1 lead with 1:05 remaining in the second period. Voracek took advantage of a screen in front of the net and ripped a shot past Fleury’s stick side for his fifth goal.

The play increased Voracek’s point streak to five games. He has two goals and three assists in that span.