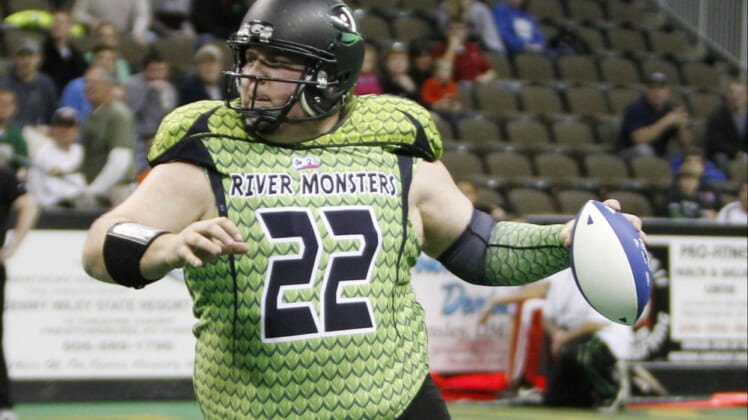 John Elway and Gary Kubiak, pay attention. Jared Lorenzen is available and is interested in playing for the Denver Broncos.

Is that a @Broncos on my helmet already? I'm the free agent you are looking for. #playingatmilehigh #crushunis. pic.twitter.com/rsJ0UBpjdr

A few quick facts on our man Lorenzen are worth mentioning.

One, a quick Google search of Lorenzen shows that he weighs in at 314 pounds, definitely earning his “Hefty Lefty” moniker. If you think Ben Roethlisberger and Cam Newton are hard to bring down, imagine what might go through a defender’s mind when this big dude is charging.

Two, Lorenzen is 35. Now, that might seem old, but it’s actually a year younger than Peyton Manning was in 2012 when he first played for the Broncos. Also, if you’re a fan of symmetry, Lorenzen played his college ball at Kentucky. Like Manning’s Tennessee, that’s an SEC school.

Three, as a member of the 2007 New York Giants, Lorenzen has a Super Bowl ring. Granted, he hasn’t played an NFL game since early that season, but the big man has been honing his craft in arena leagues.

Well, there you have it, Broncos. You could go with another team’s castoff, like Robert Griffin III or Colin Kaepernick, or you can have some real fun and go with the former Kentucky star.