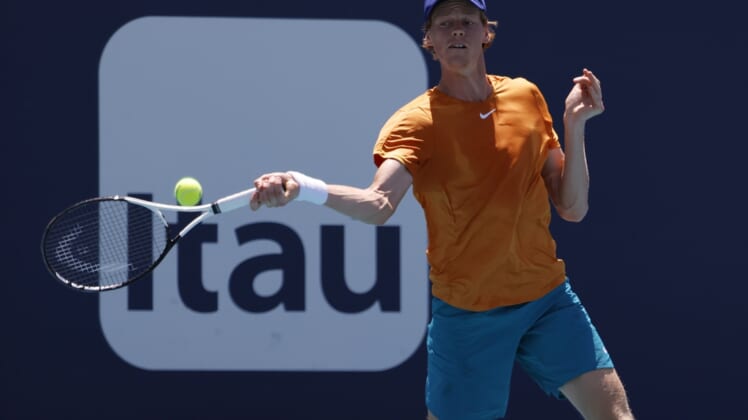 No. 9 seed Jannik Sinner of Italy rallied from a set down to eliminate Russian fifth seed Andrey Rublev 5-7, 6-1, 6-3 Thursday in the third round of the Monte Carlo Masters at Monaco.

Sinner, 20, improved his record for the season to 19-3 by overcoming Rublev, a finalist at Monte Carlo last year.

“It was tough. I tried to play every point,” Sinner said in his on-court interview. “I know him quite well. He plays quite a lot with the forehand. I tried to move him a little bit.”

Sinner held a 6-0 advantage in aces and capitalized on Rublev’s seven double faults. The Italian also saved six of 10 break points. In the first set, which lasted nearly a full hour, he made Rublev work for his set point, saving it twice.

Rublev was one of three seeded players to go down Thursday. Bulgaria’s Grigor Dimitrov upset Norwegian No. 4 seed Casper Ruud 6-3, 7-5, beating Ruud on his preferred surface. Ruud was a semifinalist at Monte Carlo last season and has won six titles on clay.

Dimitrov got the better of Ruud by winning 27 of 29 first-service points (93.1 percent) and collecting four aces.

“Despite certain moments, I felt like I was making the right decisions,” Dimitrov said in his post-match interview. “You don’t have to make things more complicated. I was reading the game well, which helped me a lot. I made a lot of returns, which gave me an advantage to start points aggressively.”

Carreno Busta saved nine of 14 break points to stay in the match. He led the second set 2-0, but Zverev pushed ahead 5-4 and Carreno Busta managed to save two match points to tie the set 5-5. But it only delayed the inevitable.

“For the second clay-court match of the season, I can’t complain too much,” Zverev said. “Yes, I have lost focus a little bit in the second set, but at the end of the day, he’s somebody that can really play. I’m happy with a two-set win.”

Zverev and Sinner will meet in the quarterfinals, and Dimitrov will face No. 11 seed Hubert Hurkacz of Poland, who was a 7-6 (2), 6-2 winner over Spaniard Albert Ramos-Vinolas.

Third seed Stefanos Tsitsipas of Greece also advanced, prevailing in two close sets over Serbian Laslo Djere, 7-5, 7-6 (1). Tsitsipas won the first set by scoring what turned out to be the only break point of the match.

Tsitsipas will play 12th seed Diego Schwartzman of Argentina in the quarterfinals after Schwartzman came back to defeat Italian Lorenzo Musetti 2-6, 6-4, 6-3.

In a battle between two Americans, No. 10 seed Taylor Fritz staved off up-and-comer Sebastian Korda 7-6 (4), 7-5. In the quarters Fritz will face Spain’s Alejandro Davidovich Fokina, who won 6-4, 6-1 over Belgian wild card David Goffin.