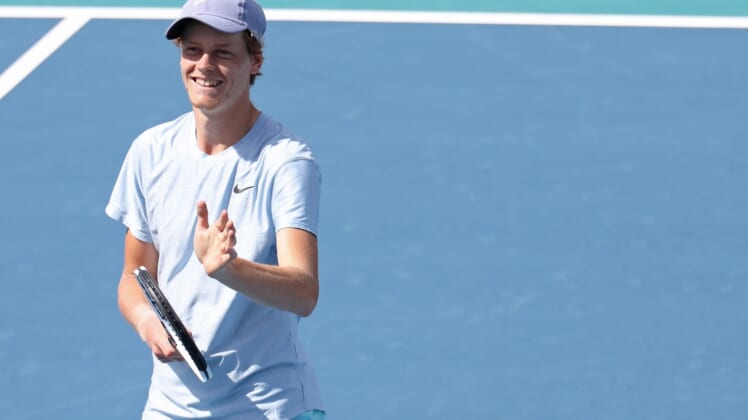 Apr 2, 2021; Miami, Florida, USA; Jannik Sinner of Italy waves to the crowd after his match against Roberto Bautista Agut of Spain (not pictured) in a men’s singles semifinal in the Miami Open at Hard Rock Stadium. Mandatory Credit: Geoff Burke-USA TODAY Sports

“It’s nice, but it doesn’t mean anything,” the 21st-seeded Sinner said afterward. “The road to have a big name is long. It’s not done in one week of a tournament.”

Sinner had to rally from a one-set deficit against seventh-seeded Bautista Agut of Spain to reach his first ATP Masters final.

A key moment occurred in the second set when Bautista Agut jumped out to a 40-0 lead and ended up having four break points in which to take a 4-3 lead.

On one of the break points, Bautista Agut chose not to hit a backhand from Sinner and the ball landed on the sideline.

“I thought that ball was going out, and it touches the line by one millimeter,” Bautista Agut said. “Tennis, sometimes it’s crazy, no? One ball can make a big difference in the match.”

Sinner went on to win the game and the set and finished off the match in two hours, 29 minutes.