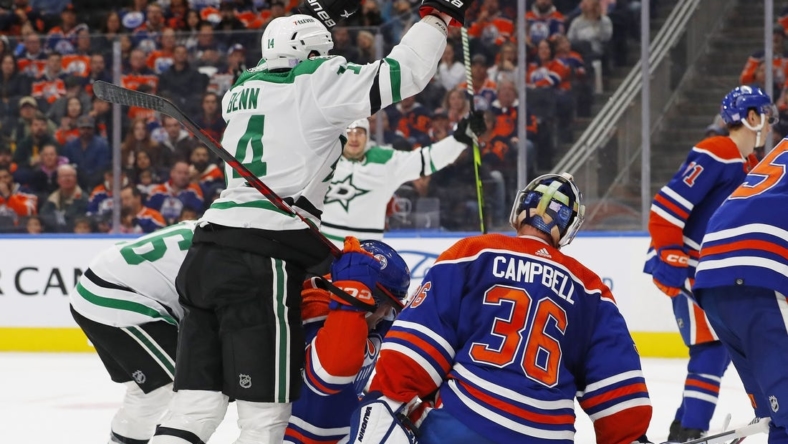 Jamie Benn scored his seventh career hat trick to help the Dallas Stars to a 6-2 win over the host Edmonton Oilers Saturday.

Jason Robertson had a goal and three assists, Joe Pavelski had a goal and an assist and Miro Heiskanen had two assists for the Stars, who have won three in a row and four of their past five. Scott Wedgewood made 28 saves.

Leon Draisaitl and Darnell Nurse scored, and Jack Campbell made 30 saves for the Oilers, who have dropped two straight after a five-game winning streak.

Pavelski gave the Stars a 1-0 lead at 6:15 of the first period. Campbell made the save on Robertson’s spin shot from the right circle but the rebound bounced to Hintz in the left circle, who found Pavelski on the back door.

Colin Miller made the score 2-0 at 6:46 of the second period, blasting a feed in stride from the blue line that beat Campbell glove side.

Draisaitl got one back for the Oilers on the power play at 10:16. Nugent-Hopkins found him uncovered below the right circle for the one-timer to cut the deficit to 2-1.

Robertson extended his goal streak to five games to put Dallas ahead 3-1 at 14:48, when his shot from the left circle hit the post and then Campbell before rolling into the net. With the tally, he became the seventh player in franchise history to have a goal streak of five games or more before the age of 24.

Benn added to the lead less than a minute later. Robertson scooped up the rebound of his own shot down low and snuck it through the crease to Benn in front to extend the lead to 4-1 at 15:27.

Nurse narrowed it to 4-2 at 3:41 of the third period, scoring far side from the left circle. The goal was his 200th NHL point.

The Stars restored their three-goal lead 20 seconds later on the power play when Heiskanen sent a feed to Benn at the right side of the net for the tap in to make it 5-2 at 4:01.

Benn completed the hat trick, going bar down from the left circle for a 6-2 lead at 12:33.