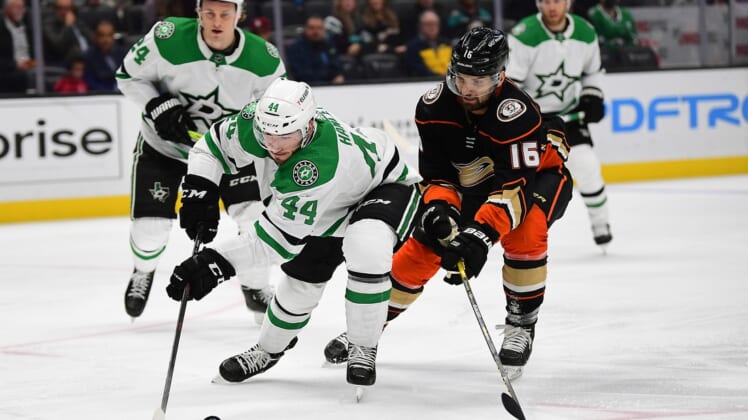 Jamie Benn scored 53 seconds into overtime and the visiting Dallas Stars continued their late-season playoff push Thursday with a 3-2 victory over the Anaheim Ducks.

Ryan Suter and Andrej Sekera also scored goals for Dallas, while goalie Jake Oettinger wound up with 21 saves after facing just five Anaheim shots through the midway point of the game. The Ducks had just 10 shots through two periods.

Benn netted the game-winner on a breakaway for his 17th goal of the season.

Jamie Drysdale and Kevin Shattenkirk each had a goal for the Ducks, while John Gibson made 32 saves as Anaheim’s losing streak reached 11 games (0-8-3). The Ducks lost to the Stars for the second time in three days by the same 3-2 score.

Anaheim moved one game from a franchise-worst, 12-game winless streak. The Ducks went 0-8-4 over a stretch from December 2018 to January 2019.

Dallas once again moved into possession of the second wild-card spot in the Western Conference, moving past Vegas. The Stars also grabbed the spot after their Tuesday victory at Anaheim before the Golden Knights took it back with a victory Wednesday.

The Stars established a 1-0 on a power play lead midway through the opening period when Suter scored his sixth of the season. Suter raced to a loose puck in front of the Anaheim goal and extended his reach to sweep the puck past Gibson.

Struggling to muster any offense, the Ducks caught a break with less than a minute remaining in the second period. Jamie Drysdale fired the puck behind the Stars’ goal just inside the blue line from the right point. The puck rebounded off the end boards, crawled up the back of Oettinger’s left leg and rolled back into the goal.

Sekera put the Stars on top again with just over four minutes remaining in the game when he skated through the slot, found a loose puck and put it past Gibson for his first of the season.

Shattenkirk scored through traffic with 3:21 to go, his eighth of the season, to tie the game 2-all.