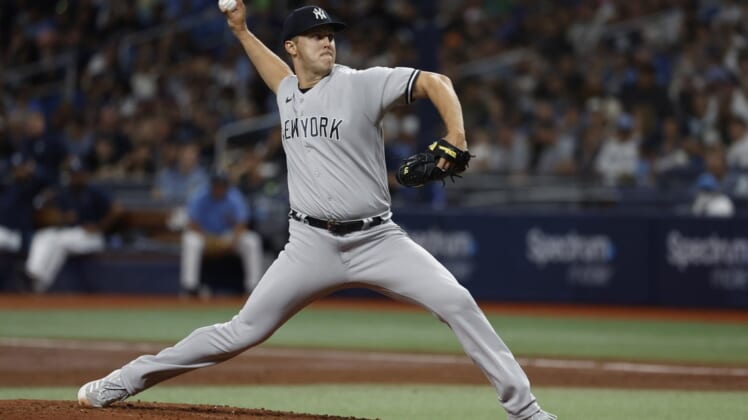 Taillon (5-1) allowed hits to Randy Arozarena and Manuel Margot in his 93-pitch outing. After his fifth-inning leadoff single, Arozarena was caught stealing.

Taillon struck out five and didn’t issue a walk, lowering his ERA to 2.49 in his ninth start.

Torres and Carpenter each had two of New York’s six hits, while the Rays managed only two. No hitter on either club produced more than one hit.

Making his fifth start, Jeffrey Springs (2-2) was sharp the first time through New York’s lineup, but the visitors got to him with the two deep shots in the fourth.

The left-hander went a career-long six innings, giving up two runs on five hits. He fanned six without a walk.

Margot doubled in the sixth to extend his hitting streak to 14 games, the American League’s longest active stretch.

The Yankees moved to 16-6 on the road, while Tampa Bay fell to 5-9 against teams with winning records.

Joey Gallo and Kyle Higashioka opened the third with consecutive singles — Gallo’s hit broke an 0-for-20 slump — but Springs escaped by getting a long flyout to the right field warning track by Anthony Rizzo to keep the game scoreless.

In the following inning, the Yankees went beyond the warning track twice to go up 2-0.

Torres launched a 438-foot rocket to left-center on Springs’ 91-mph fastball for his eighth homer. Two batters later, Carpenter recorded his first hit with his new club — a towering pop to right field on a similar fastball.

Meanwhile, Taillon breezed through four innings and retired the first 12 Tampa Bay hitters he faced before Arozarena slashed a hard grounder to center field to lead off the fifth.

Clay Holmes, who hadn’t been scored on in 23 straight innings, relieved Taillon in the ninth.

Holmes whiffed Vidal Brujan looking, got a groundout from pinch hitter Francisco Mejia and retired Kevin Kiermaier on a swinging third strike to record his sixth save as the Yankees won their fourth straight game.