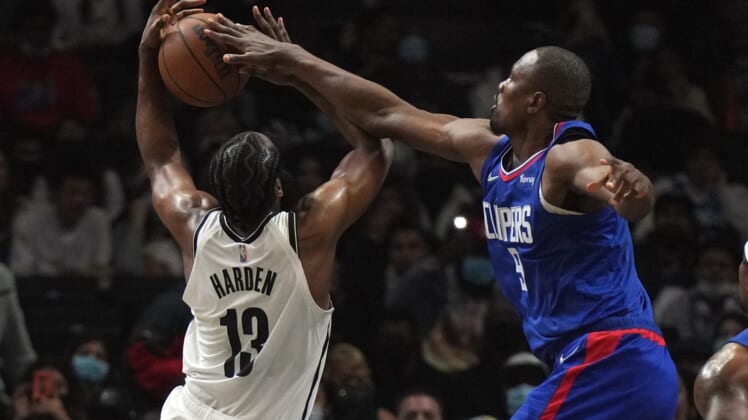 James Harden matched his season best of 39 points and added a season-high 15 assists to lead the Brooklyn Nets to a 124-108 victory over the host Los Angeles Clippers on Monday night.

Patty Mills scored 18 points on six 3-pointers as the Nets won for the sixth time in seven games despite playing without Kevin Durant. Nic Claxton also had 18 points as Brooklyn improved to 13-3 on the road.

Marcus Morris Sr. scored 24 points for the Clippers after missing the previous four games — the first three while in COVID-19 protocols as well as Sunday’s loss to the Denver Nuggets — because he wasn’t game-ready.

Eric Bledsoe and rookie Keon Johnson added 15 points for Los Angeles, which has lost five of its past six contests. Johnson’s point total is a season high.

Durant was one of seven Brooklyn players to miss the contest while in COVID-19 protocols. Kyrie Irving, who recently rejoined the team but has yet to play this season due to his vaccination status, and LaMarcus Aldridge are among the others.

Reggie Jackson was one of three Clippers in COVID-19 protocols to miss the contest.

Former Los Angeles star Blake Griffin and DeAndre’ Bembry added 12 points apiece for the Nets, who made 56.8 percent of their field-goal attempts. Brooklyn was 13 of 34 from 3-point range.

Luke Kennard added 10 points for Los Angeles, which shot 38.1 percent from the field and was 14 of 37 from 3-point range.

Harden converted a layup to give the Nets a game-best 98-76 lead with 2:51 left in the third quarter. Brooklyn led 101-81 entering the final stanza.

The Clippers later made a move, and Brandon Boston Jr. scored six straight points as Los Angeles crept within 105-91 with 7:08 left in the game. Johnson scored the final five of a 15-5 burst as Los Angeles trailed 110-100 with 4:17 to play.

But Harden converted a four-point play and Mills followed with a 3-pointer to push the lead to 17 with 3:15 left, and Brooklyn closed it out.

Harden scored 22 points in the first half as the Nets led 71-55 at the break.

Harden had 14 in a high-scoring first quarter that concluded with Brooklyn holding a 38-33. The Nets outscored Los Angeles 33-22 in the second quarter.