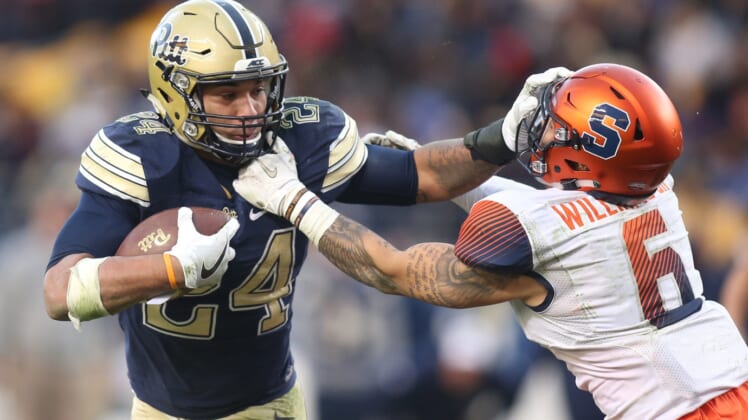 Former Pitt running back James Conner put together an unbelievable season last year after beating cancer, but incredibly he wasn’t 100-percent healthy while he did it.

Writing for The Players’ Tribune, Conner penned “A Letter to NFL GMs” in which he details the immense obstacles he’s had to overcome in his pursuit of the NFL dream.

One thing many might not know is that Conner started out as a defensive end who “was sacking guys left and right.” However, despite his production, colleges didn’t see Conner as a top prospect. Instead, he was given a two-star rating.

His fortunes changed, however, when he convinced his mom to let him attend a prospect camp at Pitt, which was a relatively expensive $50 at the time for the cap-strapped Conner family. He dominated his peers at the event, however, earning a full ride on the spot.

Conner switched to running back his senior year at high school, and the rest is history.

He made an impact as a freshman in 2013, rushing for 799 yards and eight touchdowns. Then in 2014 he busted out with 1,835 yards from scrimmage and 26 touchdowns. Everything was looking up.

As a result, Conner says he lost a ton of muscle mass and wasn’t close to 100 percent when the 2016 season began.

“I was probably at about 60% going into last season. Now, I definitely got stronger and better with each game. But, yeah, that’s just real talk. Sixty percent. If that.

“I’d talk to my doctor each week, and he encouraged my determination. For most people who get 12 rounds of chemotherapy, it takes about six to eight months to recover — layin’ low, no lifting, just trying to gain back strength. With me, as soon as physically possible, I was out there with my brothers, with a mask over my mouth and a port still embedded in my chest, participating in workouts.

“Early on, because I only had two months to prepare for the season, it was extremely difficult for me to be at my best. To be honest with you, I’d be tired just running out the tunnel.”

Conner was incredible last year for the Panthers, gaining 1,394 yards from scrimmage and 20 touchdowns. Incredibly, two of his best games came early in the season in the second and third games against Penn State and Oklahoma State, when he was at his weakest.

“Those first couple of games really took their toll on me.”

“I’m next in line, and ready to follow in his footsteps. Anything you need from a back, I can do. Obviously I’m gonna run hard. That’s a given. But if you also want somebody who can pass-protect and catch the ball out of the backfield, I’ve shown over and over again that I can do those things extremely well. Plus, because of how I play, and the intensity I bring to the game, I’m a guy that people want to line up with — a leader.”

While Conner isn’t seen as a “top” back in the upcoming 2017 NFL Draft by analysts, he certainly will get a chance to earn an NFL roster spot this summer. Based on the way he’s attacked all obstacles that have attempted to deny him so far in his young life, we’re not betting against him making an impact for the lucky team that drafts him.