James Akinjo pours in 27 as No. 1 Baylor blasts Northwestern St. 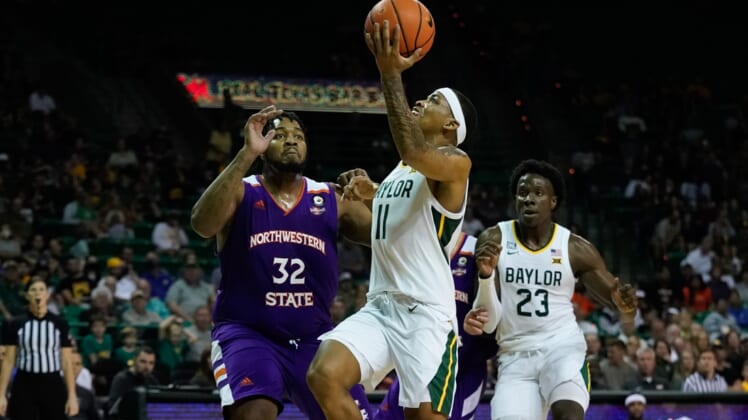 Adam Flagler tallied a season-best 21 points and had a career-best 11 assists for the Bears (12-0), who are one of five remaining unbeaten teams nationally. Jeremy Sochan registered a season-high 16 points and collected 11 rebounds and Kendall Brown had 12 points and nine rebounds for Baylor.

The Bears scored the first 13 points and were never challenged by the Demons while extending their national-best winning streak to 18 consecutive games. Baylor has recorded 10 double-digit victories this season and increased its national-best margin of victory to 26.9.

Carvell Teasett had career highs of 18 points and six 3-pointers for Northwestern State (3-11). Emareyon McDonald added 13 points and Kendal Coleman had 12 for the Demons, who were outrebounded 49-33.

Northwestern State dropped to 0-9 on the road this season. It was the fifth time the Demons have lost by 30 or more points.

Baylor shot 50 percent from the field, including 13 of 35 (37.1 percent) from 3-point range, while increasing its school-record streak of consecutive nonconference victories to 36.

Northwestern State shot 39.4 percent from the field and was 11 of 25 (44 percent) from behind the arc. The Demons committed 17 turnovers to Baylor’s nine.

Akinjo scored 18 in the first half and Flagler added 13 points and seven assists as Baylor led 58-30 at the break.

Flo Thamba capped the opening 13-0 burst with a basket four minutes into the contest.

The Demons scored the next five before Akinjo made three consecutive 3-pointers to start a 13-0 surge as Baylor opened up a 45-19 advantage with 4:14 left in the half.

Flagler hit a 3-pointer nine seconds into the second half to push the Bears’ lead over 30 for the first time.

Baylor’s advantage reached 40 for the initial time when Dale Bonner drained a 3-pointer to make it 75-35 with 13:25 remaining.