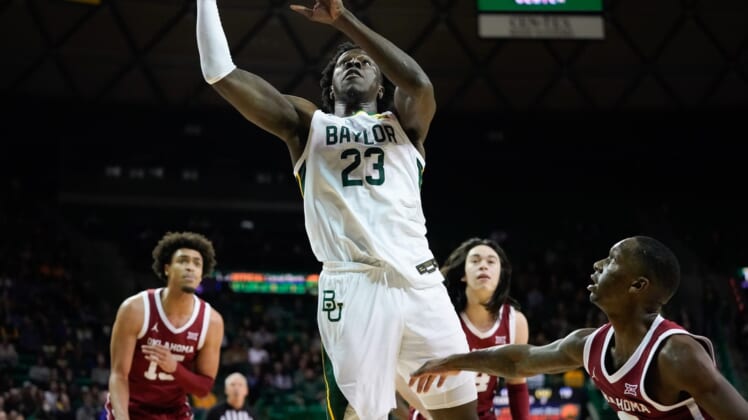 James Akinjo and Adam Flagler combined for 49 points as top-ranked Baylor held off determined Oklahoma 84-74 on Tuesday in a Big 12 Conference dogfight in Waco, Texas.

The Bears (14-0, 2-0 Big 12) led by nine points at halftime but by only five after an Oklahoma surge over the first five minutes of the second half.

Baylor counterpunched and rebuilt a double-digit edge and held on to despite a late run by the Sooners to win its nation-best 20th consecutive game.

Akinjo scored 27 points, tying his career high, and Flagler hit for 22 for the Bears. Jonathan Tchamwa Tchatchoua added 12 points for Baylor, which won despite allowing 55.8 percent shooting from Oklahoma. The Bears outrebounded the Sooners 34-16, including a 12-3 edge on the offensive glass.

Tanner Groves paced Oklahoma with 13 points while Umoja Gibson and Jalen Hill scored 12 points apiece, and Ethan Chargois hit for 10 for the Sooners (11-3, 1-1), who had a four-game winning streak snapped.

The contest went back and forth over the opening five minutes as Oklahoma matched the Bears’ tenacity on the defensive end and led 12-11 after a layup by Chargois at the 15:07 mark of the first half.

Baylor took the lead on a layup by Akinjo on the ensuing possession and had a 37-27 advantage when Jeremy Sochan dunked after an assist by Akinjo with 5:58 to play.

The Bears eventually led by as many as 13 points before settling for a 45-36 advantage at the break. Flagler and Akinjo each had 13 points over the first 20 minutes. Baylor limited Oklahoma to four rebounds in the half, had an 11-0 edge in second-chance points and turned nine Sooners’ turnovers into 10 points.

Hill paced Oklahoma with eight points as the Sooners outshot Baylor 68.2 percent to 63.3 percent in the first half.

Baylor went up by 14 points after a jumper by Flagler at the 18:47 mark of the second half before the Sooners responded with a 9-0 run over the next 2 ½ minutes to pull to within 50-45. The Bears re-established an 11-point lead with 13:28 to play and never let Oklahoma to closer than six points until the final minute.