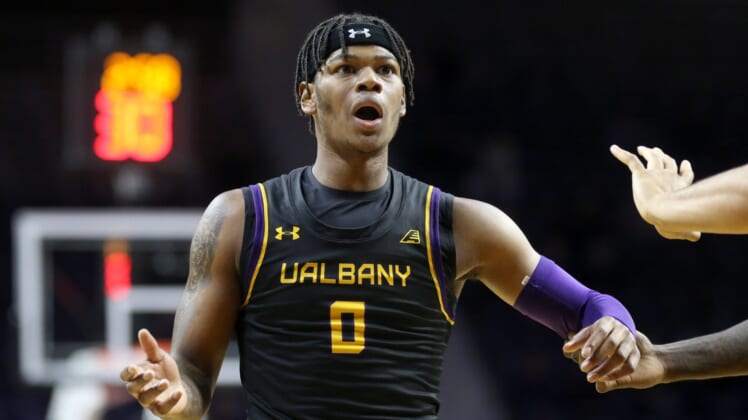 Jamel Horton made a contested three-pointer with 36 seconds left to give Albany a five-point lead and the Great Danes hung on for a 61-57 upset of host Boston College in a non-conference game Monday night.

Horton, who had five points and five assists for the Great Danes (3-7), made the shot over BC’s 7-foot Quinten Post for a 61-56 lead. De’Vondre Perry scored 16 points and Matt Cerruti added 14 for Albany, which had lost its previous five road games by an average of 17.6 points.

Jarvis Doles’ basket off an assist from Horton with 5:38 to go finished a 15-3 run and gave Albany a 54-44 lead. But the Eagles came back with eight consecutive points, capped by two foul shots by Zackery with 3:54 to go. However, Justin Neely banked in a shot in the lane to push Albany’s lead back to four.

Perry’s jumper with 2:25 left gave the Great Danes a 58-52 advantage before Zackery answered with a basket for the Eagles, again trimming the lead to four.

Albany came out surprisingly hot offensively, and led 35-26 at halftime. Albany entered the game shooting 27.9% from three-point range, but was 5-for-9 (55.6%) from long distance in the first half.

A pair of three-pointers by Cerruti, the first from the right wing and the second from the left corner, were sandwiched around a steal and subsequent layup by BC’s Demarr Langford to close the half.

But the Great Danes went cold to start the second half, managing only one basket in the first seven minutes and enabling the Eagles to melt Albany’s lead.
Langford’s 17-foot jumper with 13:19 left tied the score at 37, and his driving layup 29 seconds later put BC ahead 39-37.

Albany tied the score at 41 on Trey Hutcheson’s basket off a pass from Perry and then Neely made a steal and passed to Cerruti for a three-pointer, giving the Great Danes a 44-41 lead with 10:13 left.