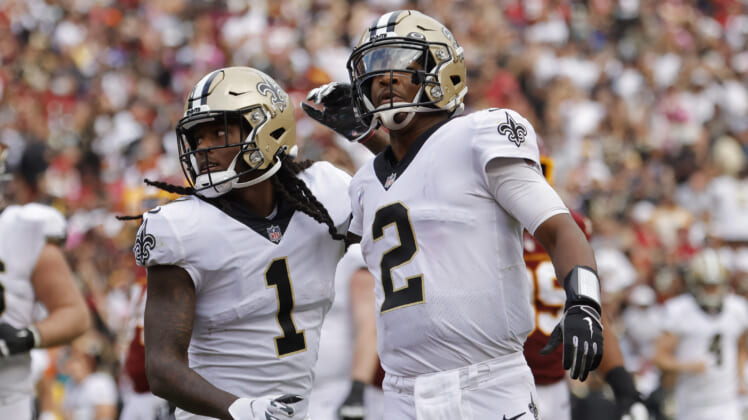 Once the New Orleans Saints missed out on Deshaun Watson, it became a real possibility that Jameis Winston would return to the Bayou.

Thats’ now come to a realization. According to NFL Media’s Tom Pelissero, Winston has re-signed with the Saints on a two-year deal worth $28 million. The deal includes $21 million in guarantees.

This is the latest domino to fall in an ever-evolving NFL quarterback market. It comes a mere hour after the Atlanta Falcons traded Matt Ryan to the Indianapolis Colts. It also seemingly settles the Saints’ quarterback situation.

New Orleans was one of the teams in on San Francisco 49ers quarterback Jimmy Garoppolo. Given Winston’s guarantees over a two-year span, there’s still a chance that the Saints add Jimmy GQ as competition for the QB1 job. However, that seems highly unlikely.

This further limits the market for Garoppolo on the trade block. Right now, it might actually be the Carolina Panthers bidding against themselves and the Seattle Seahawks for both Garoppolo and embattled Cleveland Browns quarterback Baker Mayfield. If Mayfield does indeed end up with the Seattle Seahawks, it would not be a surprise if the Panthers pulled off a move for Garoppolo.

Either way, the NFL QB carousel continues to spin in what has been a hectic offseason at this position.

With star wide receiver Michael Thomas returning to 100% and the continued presence of running back Alvin Kamara, Winston will have the necessary weapons to pick up where he left off last season.

Barring a move for someone like Garoppolo (again, highly unlikely), Winston will certainly be the Saints’ Week 1 starter when the 2022 season comes calling. That entire Winston and Taysom Hill quarterback battle from last summer is a thing of the past.