Teaming up with his former temmate at LSU, quarterback Joe Burrow, Chase dominated on the biggest stage the football world had to offer. That included becoming the first rookie to tally consecutive 100-yard playoff games. He also dominated to the tune of 266 yards in a Week 17 win over the Kansas City Chiefs.

Ja’Marr Chase is now being rewarded for this. During Thursday night’s award show in Southern California ahead of Super Bowl LVI, Chase earned the NFL Offensive Rookie of the Year award.

There was no real reason to believe someone else would be able to beat Chase out for the top rookie honors. Including that 266-yard outing, he has put up seven 100-yard games heading into the Super Bowl. Chase’s numbers were absolutely outstanding. 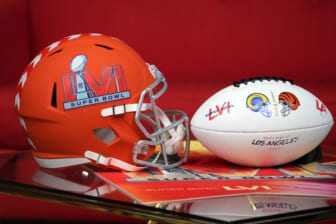 It also can’t be considered too much of a surprise that Micah Parsons earned NFL Defensive Rookie of the Year honors. In fact, he was second in NFL Defensive Player of the Year voting behind T.J. Watt. He was the unanimous selection for this award.

The No. 12 overall pick of the Dallas Cowboys in the 2021 NFL Draft, this former Penn State linebacker helped changed the dynamics of their defense during a brilliant all-around performance under coordinator Dan Quinn.

All of this comes on the heels of Parsons dominating during his rookie season with the Cowboys. Still only 22, he recorded 84 tackles, 30 quarterback hits, 20 tackles for loss, 13 sacks and three forced fumbles. That seems pretty darn decent.