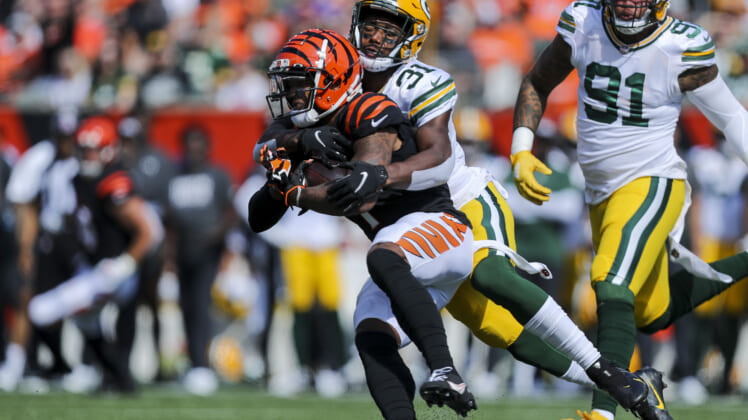 Cincinnati Bengals wide receiver Ja’Marr Chase is an early favorite for NFL Offensive Rookie of the Year. The former LSU standout entered Sunday’s game against the Green Bay Packers having caught 17 passes for 297 yards and four touchdowns in four games.

Following a preseason in which he struggled with drops, Chase has picked it up big time. That extended to Sunday’s action.

With Cincinnati down 16-7 late in the second quarter, Ja’Marr Chase caught an absolute bomb from Joe Burrow that resulted in a 70-yard touchdown. You read that right. A 70-yard touchdown. Just look at the rook take Green Bay’s defense to task.

What’s crazy here is that Burrow had exited the game on Cincinnati’s last drive after being on the receiving end of a brutal hit.

This dynamic duo has Cincinnati at a surprising 3-1 on the season. And through the first 18 quarters of his NFL career, Ja’Marr Chase has tallied 19 catches for 374 yards and five touchdowns. That’s crazy.