Two years after becoming a first-round pick, Jalen Reagor is ‘battling for a spot’ with Philadelphia Eagles 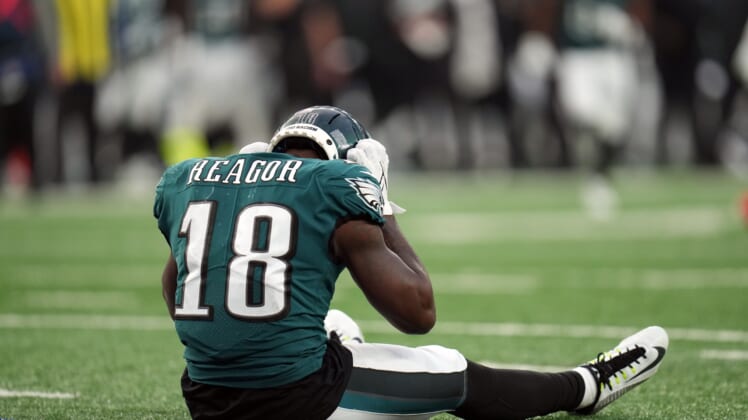 Things haven’t gone well for Jalen Reagor since becoming the 21st pick in the 2020 NFL Draft. There was immediate skepticism surrounding the pick as soon as it was made. Drafting a 5-foot-11 receiver in the first round is a risky move. You’d better hope his skills translate.

While it’s not necessarily fair to compare the two, it’s nearly impossible not to wonder what life would be like with Jefferson as an Eagle instead.

Jefferson quickly burst onto the scene, looking like one of the best receivers in football, and over the past two years, he’s earned that status. But Reagor, on the other hand, hasn’t even established himself as a starter. That’s part of why they felt the urgency to trade for A.J. Brown on draft day.

With Brown and DeVonta Smith locked in as the top two receivers for the foreseeable future, where does that leave Reagor heading into 2022?

Jalen Reagor started 13 games last season for the Eagles, but he appears to be a longshot to log more with the team in 2022. In addition to Brown and Smith, Quez Watkins has likely surpassed Reagor on the depth chart after racking up 647 receiving yards in 2021.

In two years with the Eagles, Reagor has totaled 695 yards and three touchdowns. He’s yet to top 57 yards in a single game.

At this point, the Eagles are done waiting. They’ve already made moves to ensure Reagor doesn’t hold them back. At this point, he has to earn his snaps, they no longer are putting him on the field simply because they want him to be better. Now they have better options, already on the roster.

No matter what happens, teams will have some interest in Reagor. He’s still just 23 years old, is a former first-round pick and has 4.47 speed. He may even offer some value as a special teamer, where Reagor returned a punt 73 yards for a touchdown as a rookie.

Teams may not be interested in trading for Reagor on his current rookie-scale contract, but if he becomes a free agent, he’ll have several teams interested. Then again, if the Eagles aren’t able to trade Reagor for even a late-round pick, they may be better off holding onto their former first-round pick. You never know when injuries strike.