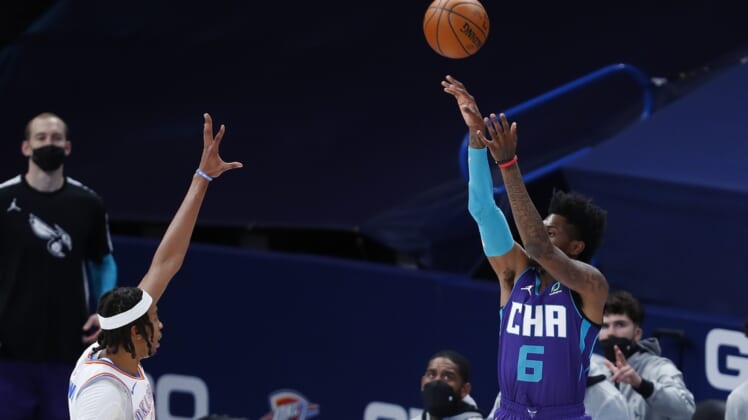 Jalen McDaniels scored a career-high 21 points to lead the Charlotte Hornets to a 113-102 win over the Oklahoma City Thunder on Wednesday night in Oklahoma City.

McDaniels took advantage of his second career start as Hornets coach James Borrego tinkered with his starting lineup in search of more consistency on the offensive end.

Most of McDaniels’ damage came in the third quarter, scoring 12 of Charlotte’s 29 points.

McDaniels hadn’t scored more than 11 points in any of his first 40 NBA games over the last two seasons. He finished 9 of 14 from the floor.

The Hornets have alternated wins and losses over their past seven games. The Thunder have dropped four consecutive games and seven of their last eight.

The Hornets scored the first seven points of the fourth quarter to start to extend the lead, helping them improve to 21-0 when leading entering the fourth.

Charlotte turned up the heat defensively during that early stretch as it had in the opening stretch of the game, forcing three turnovers in the opening minute of the fourth.

The Thunder turned the ball over 22 times for the second time in three games, with the Hornets scoring 24 points off those turnovers.

Oklahoma City struggled offensively at the start, missing its first six shots and seven of its first eight. The Thunder also turned the ball over three times and missed their first four free throws as the Hornets jumped out to a 10-point lead less than five minutes in.

Then, Aleksej Pokusevski got hot, hitting three 3-pointers in less than two minutes.

Nearly half of the Thunder’s scoring came from its two teenagers as Pokusevski and Theo Maledon each finished with 25 points.

Maledon scored 14 of his points in the fourth quarter and was 9 of 18 from the floor.

Pokusevski was 9 of 14 and 7 of 11 from behind the 3-point line to set a Thunder rookie record for 3-pointers in a game.