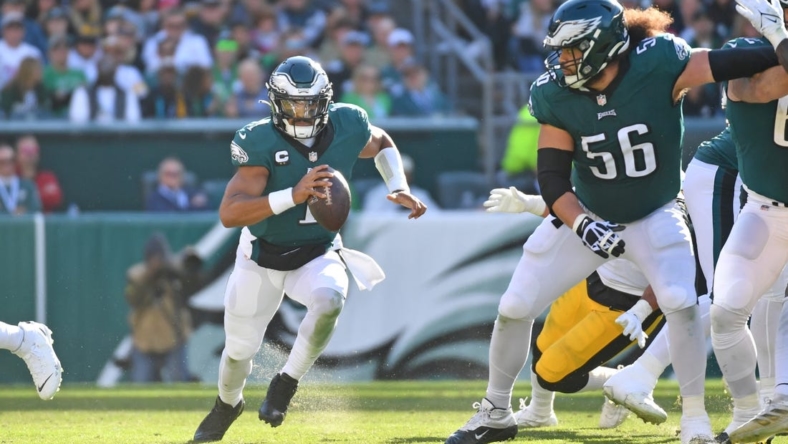 An argument could be made that Philadelphia Eagles quarterback Jalen Hurts is the frontrunner for NFL MVP, or is at least on equal footing with Buffalo Bills quarterback Josh Allen.

The dual-threat quarterback is enjoying a breakout season, ranking fifth in passer rating (105.1), seventh in completion percentage (67.0 percent) and tied for fourth in rushing touchdowns (six) while stewarding the lone undefeated team in the NFL.

He has provided a steady hand guiding the Philadelphia offense, and the timing of his ascent dovetails splendidly this week with his return to his hometown as the Eagles (7-0) are set to meet the host Houston Texans (1-5-1) on Thursday.

“Going back to Houston, it should be fun,” Hurts said. “It’s always been a dream of mine to play at NRG-Reliant Stadium and I’ve spent a lot of time in that city — my childhood, growing up in Houston, going to watch the Texans play, being in the Texans’ facility as a kid.

“Going to watch high school playoff games in that stadium and not ever having the opportunity to play in it. I will have an opportunity this week and I’m looking forward to playing. It should be fun.”

The short week will offer a defensive personnel challenge for the Eagles, who lost tackle Jordan Davis and cornerback Josiah Scott to ankle injuries in their 35-13 victory over the Pittsburgh Steelers on Sunday. Neither practiced on Monday or Tuesday, and the Eagles could be without Davis for a period extending beyond their interconference tilt with the Texans.

“He was one of the guys way back when they leave here for the summer, we kind of give them a plan, ‘This is what you need to improve,” Gannon said. “I thought that he’s improved what we wanted him to improve at a pretty high clip. So (we) feel really good about (Tuipulotu). He gives you anchor, he gives you versatility along the lines in the three- and four-down stuff. You saw he’s rushing better this year.”

Defensive lineman Maliek Collins (chest) and wide receiver Nico Collins (groin) were among five Texans who did not participate in practice on Tuesday, and while Houston is concerned with a formidable Eagles defense that added defensive end Robert Quinn last week, the Texans’ foremost worry is Hurts.

Hurts’ improved accuracy has burnished his ability to beat defenses with his scrambling ability, so much so that the Texans won’t utilize tried and true methods to approach containing him.

“It’s hard,” Texans coach Lovie Smith said. “He’s maybe the most improved ball player in the league this year. What he can do, there’s a lot of good quarterbacks that can throw it, but he brings so many more things to the table. Keeping him in the pocket, I think for us, it’s better keeping him in the pocket.

“In the past that’s what we’ve all said. I don’t know if that’s necessarily the case. Just know right now, he’s been pretty accurate in and out of the pocket.”