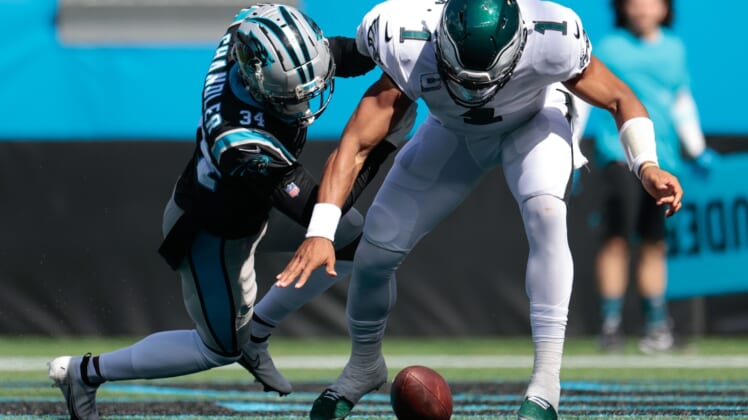 Jalen Hurts ran for a 6-yard touchdown and threw a two-point conversion pass with 2:38 remaining as the Philadelphia Eagles took the lead for the first time in a 21-18 road victory against the Carolina Panthers on Sunday afternoon in Charlotte, N.C.

Hurts had two touchdown runs and was 22-for-37 for 198 passing yards with an interception as the Eagles (2-3) snapped a three-game skid.

Panthers quarterback Sam Darnold was shaky, going 21-for-37 for 177 yards with a touchdown throw and three interceptions. Running back Chuba Hubbard gained 101 yards on 24 carries.

Zane Gonzalez kicked three field goals for Carolina (3-2), which lost its second game in a row.

Philadelphia committed turnovers on consecutive snaps in the third quarter. The first time, the Panthers went three and out and punted, and then the Panthers gave the ball back again on a Darnold interception.

Yet the Eagles turned a horrid third quarter into something good. They had only 8 yards of total offense and two turnovers to start the third before a six-play, 80-yard touchdown drive that concluded with Hurts scoring on a 1-yard run with 8 seconds left in the quarter. The Eagles pulled within 15-13.

The Panthers finally did something offensively, keeping the ball for more than 6 1/2 minutes before Gonzales’ third field goal — this one from 50 yards with 8:33 remaining.

Philadelphia reached Carolina territory on the ensuing possession, but stalled at the 39-yard line on Hurts’ incomplete fourth-and-4 pass. The Eagles held on defense, and T.J. Edwards blocked a Carolina punt to set up the team’s offense at the 27-yard line on the way to a go-ahead score.

The Panthers played their second game in a row without injured running back Christian McCaffrey, whose hamstring injury kept him sidelined.

The teams combined to attempt 42 passes in the first half. Carolina led 15-6 at the break.

Gonzalez made field goals from 48 and 43 yards in the first half for Carolina. Jake Elliott booted 30- and 58-yard field goals in the half for the Eagles.

The Eagles converted for a field goal following Darius Slay’s interception of Darnold in the first quarter.

The Panthers went up 10-3 with Darnold connecting with Tommy Tremble for a 5-yard touchdown play.

Philadelphia’s problems were growing, though the Eagles caught a break when a bad snap resulted in a safety for Carolina rather than a touchdown, moving the score to 15-3.