The Philadelphia Eagles came out aggressive against the Minnesota Vikings, with Jalen Hurts delivering a perfect TD pass to Quez Watkins. 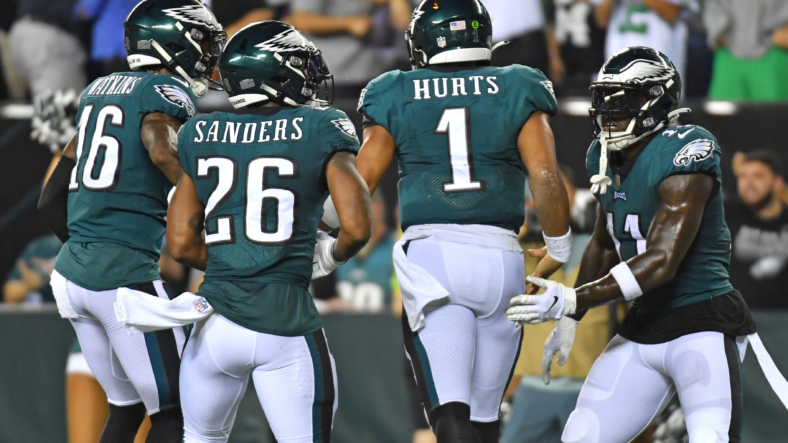 The Philadelphia Eagles jumped out to a 14-0 lead over the Minnesota Vikings early in the second quarter when Jalen Hurts — connecting on his 10th pass in as many attempts — dropped a dime to a streaking Quez Watkins for the 53-yard touchdown.

If Watkins had been any more wide open than he already was, Minnesota’s defensive backs coach Daronte Jones might have called for an emergency meeting right there on the spot while savagely ripping up the gameplan.

A play like this is typically reserved for a video game like “Madden,” where you continuously show the replay of the torched defensive backs until your friend has finally had enough and is fully prepared to launch their controller directly at the TV.

But this is real life and it’s the good stuff, at least for those with no emotional attachment to the Vikings.

Speaking of throwing controllers, it might be a safe bet that Aaron Rodgers just threw his remote control while having vivid flashbacks to a very bad Week 1 drop by wide-open rookie Christian Watson against this same Vikings secondary. But that’s a story for another time.

The Eagles’ quarterback has made a point to spread the ball all over the place early on, allowing everyone to get involved and hardly making things easy on the Vikings. When you already have six different players with two catches or more before halftime, you are absolutely cooking with gas.

It’s crystal clear that the Vikings simply trying to limit A.J. Brown (10 catches for 155 yards in Week 1) from going crazy once again will hardly be enough to leave Philly with a win.