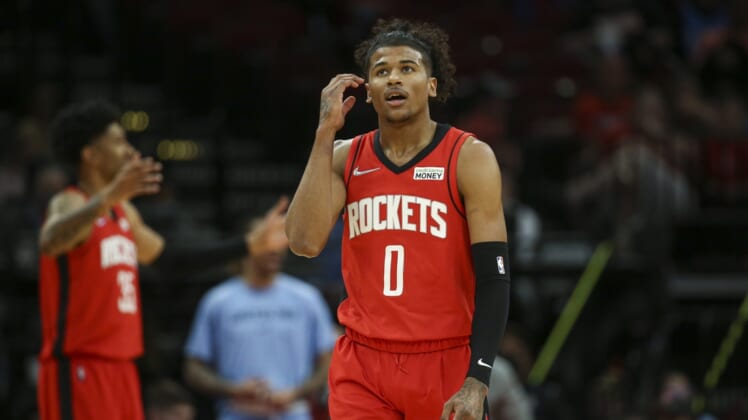 Houston Rockets rookie guard Jalen Green is heating up just as his team’s season is coming to a close.

Green is providing a ray of optimism for the Rockets, who conclude a back-to-back against the host Portland Trail Blazers on Saturday. Houston opened the set with a 125-106 victory on Friday in Portland.

Green made five 3-pointers and finished with a game-high 23 points as the Rockets won for just the fourth time in their past 23 games. Seven Houston players scored in double figures, including Christian Wood, who tallied 10 points and 11 rebounds.

Houston (19-55) had lost seven of its previous eight meetings against Portland before turning in a dominant effort on Friday. The Rockets never trailed and led by as many as 24 in the third quarter.

After struggling with his shot for much of the season, Green is averaging 19.1 points on 48.8 percent shooting in 14 games this month.

The second overall pick in last summer’s draft is drawing raves from players across the league, including Los Angeles Lakers star LeBron James.

Green will look to maintain his momentum against a depleted Portland squad. The Blazers have lost 12 of 14 games since the All-Star break.

With so many players out, one of the starters Friday was Drew Eubanks, who, along with reserve Kris Dunn, is on a 10-day contracts.

Portland had few answers for Houston on Friday, allowing the Rockets to shoot 51.8 percent from the field and 19 of 45 (42.2 percent) from 3-point range.

“Any time a team makes 19 threes on you, it makes it tough,” Blazers coach Chauncey Billups said. “It was a rough night for us from that standpoint.”

One bright spot for the Blazers was the play of rookie forward Trendon Watford, who recorded 19 points, six assists and five rebounds. Eubanks added 18 points and has scored in double figures in eight straight games.

Houston, which owns the league’s worst record, is aiming for its first two-game winning streak since mid-January. The Rockets snapped an 11-game road losing skid with the Friday victory.

The rebuilding Rockets boast a young roster that features several promising rookies, including center Alperen Sengun, who has three double-doubles this month but was held to four points in 21 minutes on Friday.

“He’s a rookie,” Wood said. “He’s young. He’s 19. He has a long way to go. He’s learning this season, like everybody is. Me, too. You can see his progression, getting better defensively.”