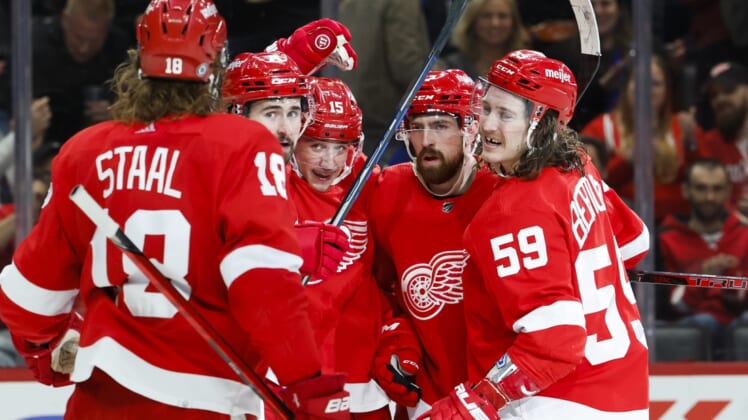 Jakub Vrana scored two goals to lift the Detroit Red Wings to a 6-3 home win over the Philadelphia Flyers on Tuesday.

Detroit opened the scoring with 14:43 remaining in the first period on a goal by Veleno, who circled the back of the net and fired a shot into the goal as Philadelphia defenseman Rasmus Ristolainen collided with goalie Carter Hart in the crease, preventing Hart from stopping Veleno’s shot.

The Red Wings made it 2-0 with 10:45 left in the first when Vrana swatted at a bouncing puck in the left face-off circle and saw it go over Hart’s glove and into the net.

Just 1:07 into the second period, Detroit took a 3-0 lead when Raymond took a pass from Dylan Larkin and one-timed a shot from the left face-off circle past Hart.

Philadelphia responded just 25 seconds later, cutting Detroit’s lead to 3-1 when Farabee took a pass from Kevin Hayes on a three-on-none breakaway following a Detroit turnover in its zone and tapped the puck into an open goal.

Philadelphia then cut Detroit’s lead to 3-2 with 12:04 remaining in the second period on a goal by Lindblom, who took a pass from Travis Konecny, skated into the Detroit zone all alone and beat Detroit goalie Alex Nedeljkovic to the glove side.

Detroit regained a two-goal lead at 4-2 with 1:09 left in the second on another goal by Vrana, who blasted a shot from the right face-off circle underneath the crossbar.

The score remained that way until 8:37 left in the game, when van Riemsdyk scored from the left face-off circle to make it 4-3 Detroit.

After Philadelphia pulled Hart for an extra attacker, Detroit took a 5-3 lead with 2:51 remaining on an empty-net goal by Sundqvist.